No fandango for you: EU boots UK off Galileo satellite project

It's official: the UK is going to be booted off the Galileo satellite GPS program as a result of Brexit, despite furious protestations from Britain that it's a special case.

The decision was reached by all 27 member states of Europe at a meeting on Tuesday and was confirmed in a slide deck [PDF] released on Wednesday.

Just last week the UK minister in charge of Brexit, David Davis, repeatedly referenced the program in a speech and claimed that any decision to exclude the UK from Galileo would "delay the project by up to three years" and cost "an extra billion euros."

He said that the position of EU negotiator Michel Barnier to exclude the UK from Galileo since it would no longer be a member of the European Union was equivalent to "shooting itself in the foot just to prove that the gun works."

Ultimately, however, despite reservations from some countries, everyone agreed to back up Barnier. As a result, when Brexit happens, the UK will be reduced to third party status on the critical program.

Galileo is due to go live in 2020 and will provide an alternative to US, Chinese and Russian global positioning systems.

The UK will still be allowed to use the system and can act as an observer but it will be frozen out of future developments and contracts. What the UK government will be most upset about is that the fact it will be no longer be allowed access to the highly secure military-grade signal Public Regulated Service (PRS), a huge blow that will put the UK, and its military, far behind other Western nations when it comes to using the latest global technologies. 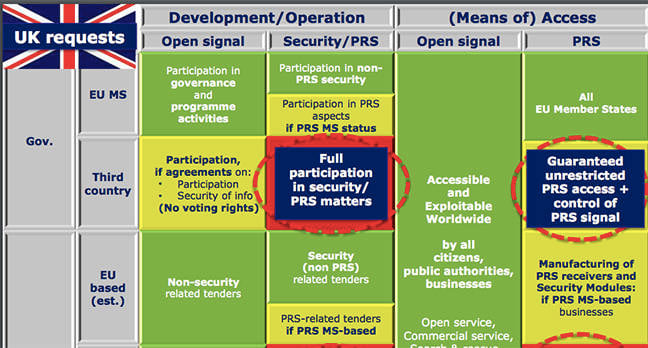 One slide from the Nope presentation

Last month, UK chancellor Philip Hammond said that if the UK was booted off the program it would "have to go it alone, possibly with other partners outside Europe and the US, to build a third competing system" – most likely other nations in the Five Eyes alliance: Australia, Canada and New Zealand (the US is the fifth "eye").

That is a possible course of action but would cost the UK far, far more than the Galileo system – billions of pounds more – and take it until at least 2025 to get up and running, probably much longer.

The UK had repeatedly argued that Galileo was a special case in Brexit negotiations given the amount of work, technology and money that the UK has contributed. And it tried to use the hosting of Galileo sensor stations in the Falkland Islands and Ascension Island as a bargaining chip to be given special status in the project.

But to no avail: Barnier's position for months has been that the UK has to be kicked out the program and, as had happened repeatedly in Brexit negotiations, the fact that the EU holds all the cards has meant the UK hasn't got a leg to stand on.

It increasingly looks like a game of chicken that only one side is playing.

The slide deck shows the UK's requests in a matrix, drawing big red circles around the most critical ones. It argues that conceding to those requests would be a "change in nature" of the program and lead to a loss in "strategic autonomy" for Europe. ®