Geoboffins baffled as Ceres is crawling with carbon organics

Ceres contains more carbon-based compounds - the chemical building blocks for life - than previously thought, according to a new study.

Last year, scientists discovered that not only was Ceres’ surface peppered with patches of organic material, but that it is rich in water ice and its crust contains ice, salts and hydrated materials - a sign that an it may have harbored an ancient ocean in its past. Liquid water and carbon are both considered essential ingredients for the creation of life.

Now, a paper published in Geophysical Research Letters shows that there is a higher concentration of carbon-based compounds on its surface than previous estimates. And a team of scientists from Brown University and Carnegie Institution of Washington aren’t quite sure why.

"We estimate that as much as 40 to 50 per cent of the spectral signal we see on Ceres is explained by organics. That's a huge difference compared to the 6 to 10 per cent previously reported based on terrestrial organic compounds," said Hannah Kaplan, who led the study when she was a PhD student at Brown University and is now a postdoctoral researcher at the Southwest Research Institute.

Previous measurements looked at the reflectance spectra of the organic material on Ceres and compared it to rocks on Earth. Instead, the new study compares it to meteorites. The spectral reflectance of organic compounds is different between matter on Earth and on meteorites, leading scientists to underestimate the amount.

"What this paper shows is that you can get really different results depending upon the type of organic material you use to compare with and interpret the Ceres data. That's important not only for Ceres, but also for missions that will soon explore asteroids that may also contain organic material," said Kaplan.

The team are puzzled by what might have led to the higher abundance of organic compounds. They may have been delivered by comets colliding with the dwarf planet or formed directly on Ceres' surface. 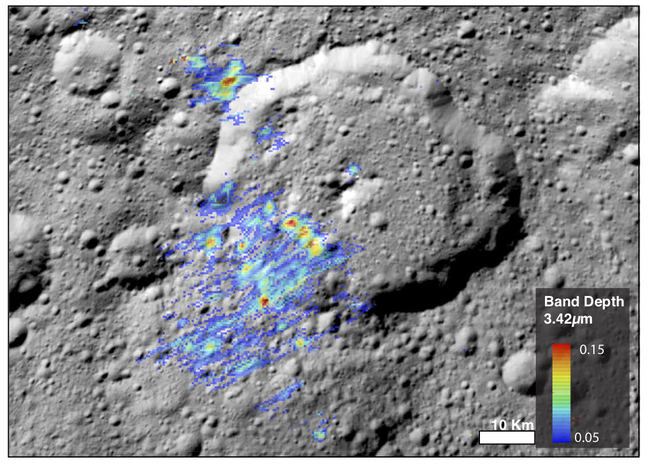 Comets do have more organic material than asteroids, but it’s likely that the high heat from the impact of a collision would destroy them. It’s also unknown what process concentrated such high amounts of organics in small patches.

"If the organics are made on Ceres, then you likely still need a mechanism to concentrate it in these specific locations or at least to preserve it in these spots," said Ralph Milliken, co-author of the study and an associate professor at Brown University.

"It's not clear what that mechanism might be. Ceres is clearly a fascinating object, and understanding the story and origin of organics in these spots and elsewhere on Ceres will likely require future missions that can analyze or return samples." ®