Video Time may be up for America's plucky Opportunity rover that has trundled across the surface of Mars for more than 14 years.

During a press conference on Wednesday, NASA officials said that the robot had been caught in a massive dust storm encircling a quarter of the planet, and this had blocked the probe's solar cells from charging its battery. The device has almost certainly entered low-power mode, with all systems shut down except for a trickle of energy keeping the bot's main clock ticking.

"Our expectation at this point is that rover has gone to sleep and will remain until it can charge enough to a certain threshold," said John Callas, Opportunity project manager at NASA's Jet Propulsion Laboratory.

"We're in waiting mode, listening every day for a signal. With the clock fault we're concerned, but we're hopeful that the storm will clear and the rover will begin to communicate with us again."

The rover first faced peril on May 30, when satellites orbiting the Red Planet spotted what looked like a dust storm developing albeit some distance from Opportunity. Over the next few days, the tempest increased in intensity, engulfing the 'droid, and drastically cut the amount of sunlight it was able to harvest via its solar panels.

Callas explained this wasn't alarming at first. However, as the rover's power supply started to dwindle, it moved into power-saving mode. The fear now is that it will run so low on battery charge that it will have to disable its master clock, and it may grow too cold without proper heating, and it may never recover if the dust storm dumps debris all over its vital solar panels. 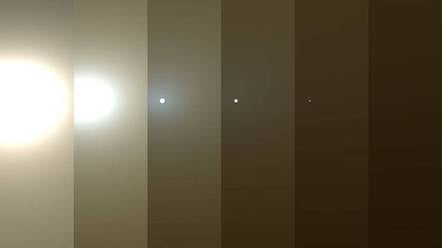 Day by day, the Sun is going out on Opportunity ... Photos from the craft show our star disappearing from view (Source: NASA)

If the master clock stops, Opportunity is programmed to wait until it can get enough power to operate via the panels, and then charge up to an operational level. It will then fire up every four hours and attempt to work out the Martian day and night cycles. It will call home during the day, via satellites orbiting above, when its potential power is at maximum.

If the solar panels become caked with dust, and thus stop working properly, there won't be enough juice to restart the clock. And without that clock and sufficient power, it will never be able to signal Earth.

The other worry is the cold. The rover is designed to operate in temperatures as low as -55 Centigrade (-67 in Freedom units). NASA thinks the coldest it'll get on Mars at the moment is -36 Centigrade (-33 Fahrenheit), so it should be fine for now without electric heating.

Opportunity, like its bigger brother Curiosity, does have a nuclear heating system. The stranded rover houses eight radioisotope heater units packed with plutonium, which generate about eight watts of heat. That 8W is not enough to help keep the thing from freezing over if the mercury continues to drop.

Luckily, the storm is occurring in summer, unlike the winter conditions that killed the Spirit rover in similar circumstances.

Another bright spot is the state of Opportunity's batteries. Despite the fact they are 14 years old and have gone through about 5,000 charging cycles, the twin lithium batteries are still operating at about 85 per cent of their capacity.

"They are the finest batteries in the Solar System," Callas said during the press conference, a recording of which is below. "I wish my mobile phone had one that was as good. The batteries will ride this out well."

Jim Watzin, director of the Mars Exploration Program, said this attention to build quality is what has kept the Opportunity rover going so far past its 90-day mission forecast. He said he was hopeful the mission isn't over yet.

"We're all pulling for Opportunity, it has been a remarkable rover," he said. "Regardless of how this turns out this rover has proved to be a valuable investment."

NASA is now listening constantly for any communication from the rover, but that won’t happen until the storm clears. Once that happens, if the solar panels aren't too badly coated in dust, the team is expecting to get word from the little robot that could – although Callas said it was a worrying time.

"We have a very tight emotional connection with the rover; it's like having a loved one in a coma," he said. "Doctors can tell you to give it time and that vital signs are good, but when it's your 96-year old grandmother in there it's different. We are concerned and we aren’t out of the woods yet." ®