Quobyte, Pure Storage and Caringo all helping out

Quobyte, FlashBlade and Caringo will all flower at JASMIN, the UK's environmental science supercomputer site, it has emerged.

The JASMIN super-data-cluster system is based at the Science and Technology Facilities Council's Rutherford Appleton Laboratory in Oxfordshire and managed by RAL Space's Centre for Environmental Data Analysis (CEDA). In 2017 it had 20PB usable capacity of mostly Panasas HPC storage, described as the largest single-site Panasas installation and Panasas realm.

A Phase 4 development involves upgrading its storage and its compute facilities.

According to a RAL site report (PDF) in a CERN update, JASMIN has added 30PB of usable capacity with a Quobyte software-defined scale-out parallel file system using Dell and Supermicro hardware. 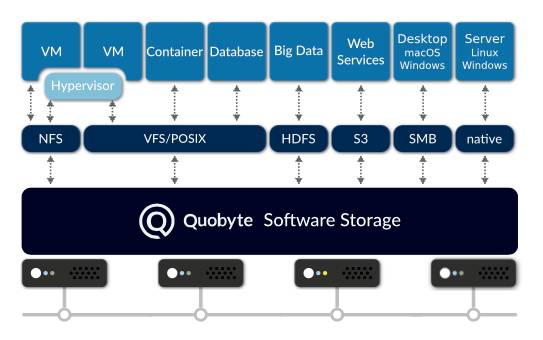 JASMIN said: "Some of the [group workspace storage] data will be migrated to the first generation of the new Scale-Out FileSystem (SOF) storage, which has different properties than the existing Panasas parallel file system which has provided the bulk of the existing JASMIN storage."

Some 5PB is interchangeable between file and S3-format object storage.

There is another 5PB of dedicated S3 object storage, with an NFS interface, from Caringo using Supermicro hardware.

JASMIN has also acquired 500TB of Pure Storage FlashBlade capacity with a NAS interface. It will be used for "home and scratch small file/compilation/metadata heavy workloads".

The STFC SCARF facility has added five new shelves of Panasas ActiveStor 20 parallel storage connected via Ethernet. It is migrating applications serving from a SPOF NFS server to a Quobyte 4-node cluster, possibly integrated into JASMIN. ®