Microsoft shoves US govt IT contract where ICE throws kids: Out of sight in a chain-link cage

Outcry over children being separated from parents raises ructions 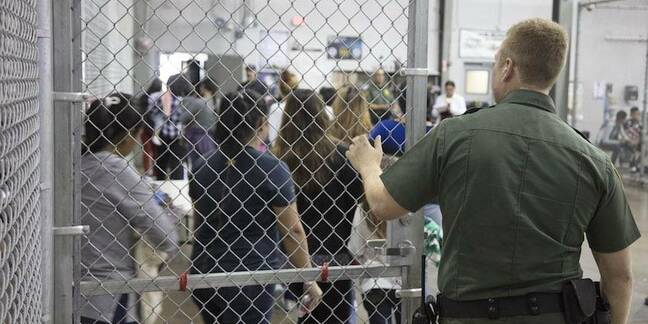 Microsoft removed and then replaced a reference to its work for the US government's immigration authorities in the wake of a national outcry over a new policy of separating children from their asylum-seeking parents at the border.

Back in January, Microsoft published a blog post that covered new contracts it had signed with ICE – the Immigration and Customs Enforcement department – and the US Air Force.

"Federal agencies continue to advance capabilities with Azure Government," the post was titled, and covered how Azure was being used to deal with "sensitive unclassified data" including identifying individuals through facial recognition.

Microsoft appeared less proud on Monday however following widespread criticism of the Trump Administration's decision to separate children from their parents.

Amid damning editorials – one written by former first lady Laura Bush – and protests and furious denunciations online and off by lawmakers and citizens, the blog post was noticed and became the target of an online campaign.

One advocacy group argued that the work meant that Microsoft employees were "complicit" in the controversial policy, echoing a recent argument at Google over its use of AI technology for US military drones.

Microsoft responded by removing any reference to ICE in the post – a decision that only served to fan the online flames higher as some hailed the removal and others bellowed with rage at censorship, i.e. a normal day in the social media spotlight.

Soon after, Microsoft reversed the edit and put the references back in, sparking yet more online teeth-gnashing. Inevitably, the company was asked to explain.

"An employee edited the blog after seeing commentary in social media," the company said in response to queries about the flip-flopping. "This was a mistake and as soon as it was noticed the blog was reverted to previous language."

The Windows giant later put out another statement:

As a company, Microsoft is dismayed by the forcible separation of children from their families at the border. Family unification has been a fundamental tenet of American policy and law since the end of World War II. As a company Microsoft has worked for over 20 years to combine technology with the rule of law to ensure that children who are refugees and immigrants can remain with their parents.

We need to continue to build on this noble tradition rather than change course now. We urge the administration to change its policy and Congress to pass legislation ensuring children are no longer separated from their families.

Microsoft has numerous contracts with the US government, of which ICE makes up approximately $20m. Other tech giants also have contracts with ICE, but none of them appear to have directly referenced them in blog posts, making it harder for the reflexive attack approach that social media has made all too familiar.

As to the tech giant's true feelings, Microsoft president Brad Smith used the fact that it was Father's Day on Sunday to write a post explicitly criticizing Uncle Sam for taking young kids away from their guardians.

"This Father’s Day provides an opportunity to recall one thing we shouldn’t take for granted – the opportunity to be with our children," he wrote. "Given the news of migrant children being separated from their parents at the US-Mexico border, it's especially poignant this year."

He went on: "When we keep children with their parents, we not only follow in the footsteps of one of the world’s oldest and most important humanitarian traditions, we help build a stronger country."

As for the policy itself, it has been an extremely confusing day with multiple different arguments coming from the White House. President Trump has, with his usual panache, used the situation to fire invective at his enemies, perceived and otherwise. Homeland Security officials first denied the policy, then defended it, then focused on nitpicking media criticism of the policy.

The Justice Department first claimed it was required under the law – a position that pretty much everyone disagrees with – and then took to quoting Bible verse to justify it. And the man thought to be responsible for the "zero tolerance" approach, White House advisor Stephen Miller fiercely defended it as necessary and appropriate. ®