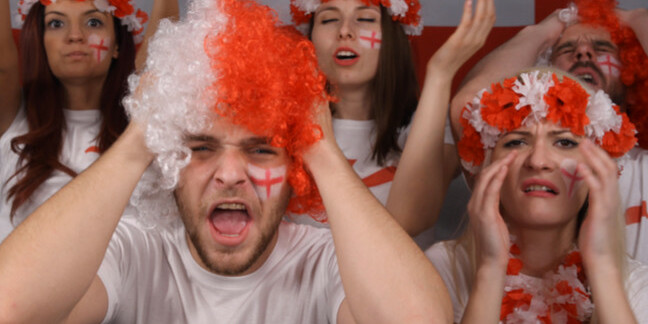 Problems began at around 4pm yesterday with Sky's status page (followed later by its support account) reporting multiple exchange failures in Cambridgeshire, Lincolnshire and over the East Midlands.

As well as patchy internet access, Sky warned that users would struggle to make phone calls.

New: Lincolnshire. We are aware customers may be experiencing issues going online or making calls. Please check your My Sky App and https://t.co/1zHcDgvFPa for updates. Apologies for any inconvenience.

At 1903 UK time, when England's first game of its World Cup campaign was getting under way, Sky confirmed on its status page that the issue was a fibre break. By 2035, engineers were waiting for the appropriate part to arrive and by 2252 they were trying to fit it.

More than 12 hours later, engineers were still trying to deal with the problem due to the "scale of the fault". At time of writing, Sky's service was still having a lie-down, with the broadband provider simply saying "resolution is taking longer than hoped".

The timing is unfortunate, with streaming services such as iPlayer piloting 4K viewing of England's football shenanigans. In addition, much of the 4K content (and everything on-demand) on the flagship Sky Q box needs a minimum broadband speed that is a bit quicker than the 0Mbps being enjoyed by its Midlands customers.

Viewers were forced to resort to traditional over-the-air methods in order to sate their footballing needs. Other users, hoping to while away the evening with a bit of web surfing or online game action, were similarly affected.

As home-workers began attempting to log on this morning and found the service still down, the wailing on social media intensified, with some invoking the Almighty in their pleas for Sky to get its act together.

@SkyHelpTeam how much longer is this to go on for? I’ve had no internet now for 16 hours and desperate to get on as I’ve got work to do! I hope to god we are getting compensation for this!

Seemingly on some sort of misery tour of the UK, Sky Broadband's fail-bus also took a stop in Cornwall over the weekend, with the service reporting it was down at 0902 on 17 June (although users had been reporting problems since 2200 the previous evening) and confirming a fibre break by 1433 that afternoon.

The break was not as catastrophic as that currently being endured by the Midlands and service was back up for most users by 1623.

The horror of dads having to endure a Father's Day without a working internet connection to amuse their offspring was brought home by this tweet:

How come sky seems to be the last provider working my kids have made fathers day unbearable with no internet give us an eta on the fix so i can finally relax on fathers day.

Fathers around the world feel your pain, Wayne.

A Sky spokesperson told El Reg: "A builder scored an own goal on us and other service providers by slicing through a main cable yesterday. It was something our engineers needed extra time to fix, just like Harry Kane. They worked through the night and day to restore service for customers but we are now back in the game with services restored to the areas affected. We're sorry for the inconvenience they have experienced."

In the meantime, users who have experienced more than 24 hours without connectivity can seek some sort of compensation from the broadband outfit. ®

Hi Andy, thanks for your message. If the outage lasts over 24 hours we can apply a loss of service credit to cover the cost of your services for the time it is down. ^LQ