Who dares wins, they say, so Toshiba's SAS drive plans another hit on SATA

Toshiba has sent in a SAS SSD hit team to assault SATA SSDs and their slower interface in the shape of its RM5 vSAS drive.

It has priced the drive at SATA levels, referring to it as a vSAS drive, where "v" is for value. OK. SATA interface speeds of 6Gbit/s are not good enough for servers, and cheaper SAS should, Toshiba said, take over.

The interface is 12Gbit/s SAS, with a single port, and it is intended for server use. 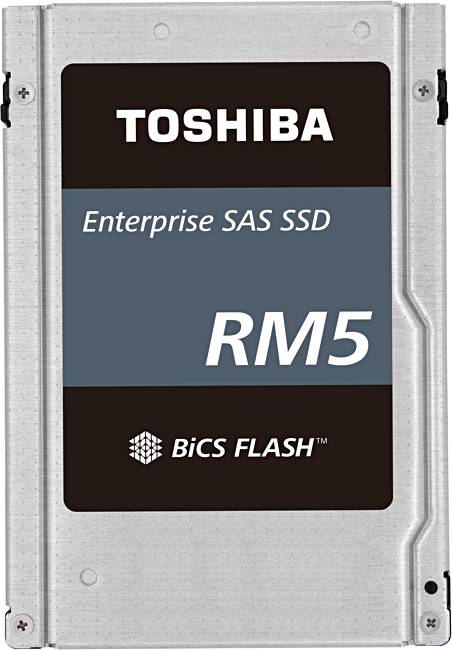 Toshiba has said SATA drives often use SAS expanders to scale out, while the RM5 enables use of end-to-end native SAS.

Toshiba's RM5 outperforms them, except on random writes where Samsung's 860 Pro is much better.

Of course we could step back and view the RM5 as just another SAS server SSD, in which case it's slow. Here's a comparison with Samsung's PM1643 and HGST's Ultrastar SS300:

The RM5 sucks at this level.

Toshiba hopes SATA will give way to SAS in server 2.5-inch SSDs while expecting performance SAS SSDs to give way to NVMe. It could grow sales by converting SAS SSDs to SAS ones until, eventually, NVMe takes over from SAS as well.

Jeremy Werner, VP marketing and product planning for Toshiba Memory America, said: "Servers that use SATA currently represent the majority of the market, and our RM5 series is designed to replace SATA SSDs. This is important, as the roadmap for SATA ends with the current 6Gbit/s generation."

Toshiba hasn't yet provided a release date or pricing for the RM5. ®

Up to 5,600 megatransfers per second at just 1.1V, company claims