There's a scene in Showtime's Billions where a forward-thinking hedge fund manager is interviewing prospective quantitative analysts and gives them a flat-packed cardboard box. The candidates come and go until one finally correctly supposes that the box is impossible to put together, and recognition of this apparently shows the ability to "think outside the box".

Nintendo's recently released Labo for Switch trusts you with the flatpack and in doing so has done something genuinely new in gaming. Any quant worth their salt would have done well to buy long on Nintendo shares when Labo was announced at E3 last summer.

Released on April 27, are we still playing the cat piano or have all the Toy-Cons – the term for the cardboard projects – been stacked in the recycling with the empty pizza boxes? Though the Labo is ostensibly aimed at the family market (particularly children in the six-to-12 range), helping kids demonstrate for themselves the basics of engineering, physics, and basic programming, there are qualities that make the Toy-Cons worth visiting even as an adult.

The Labo software on the Switch (which is what you're paying £60 for) is divided into three parts – make, play and explore. The touchscreen instructions unravel the mysteries of your flat cardboard kits and how they turn into interactive 3D objects. They can be rotated and reversed to give a clear idea of what needs to go where or thankfully fast-forwarded (there's some painful repetition, especially when making all the keys for the cat piano). 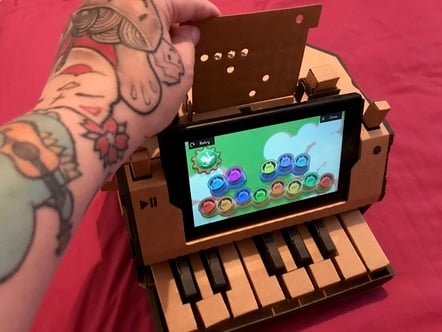 But this isn't to be sniffed at – the folding and feeding cardboard flaps through each other brings on a transcendental joy as you near completion of your fishing rod. Sometimes you can't quite see where the instructions are taking you and how it will all fit together until the last few steps, as if Nintendo were teaching you enchanted origami.

Each of the five projects included in the Toy-Con 01 Variety box takes about a day to build and play. The play element is putting your creation through its paces as a toy or testing your morality by resisting the call to drown your Tamagotchi with the functional cardboard tap you've just built.

Discover mode is where Labo's longevity lies. It helps you go under the bonnet and learn more about how each Toy-Con works, as well as ways to enhance it (such as by setting up an sat-nav route for the car or recording and editing your own compositions for the piano). Lo-fi hipster nerds are already filling YouTube with pedal boards soldered to Joy-Con to make dystopian echo chambers [Ed – actually not bad if you like ambient music].

The creation of a cardboard spring that controls a button or lever has got educators all shouty about its virtues as an invaluable aid for embedding STEM skills, and the Toy-Con Garage software for the Switch proves it does more than what it says on the box. For example, it allows you to connect nodes – actions and reactions – on the Switch screen to map kits, so you can use the motor bike throttle to control the RC car's acceleration. You don't even need to use Nintendo's cardboard – many users are getting creative mapping functions on to any old pizza box to create versions of Pong or even guitars.

The program offers a surprising amount of flexibility. Just a month after its release, inventor Kentaro Yoshifuji had adapted the motorcycle Toy-Con so that a disabled teenager could use it to control his wheelchair.

Labo joins a host of build-and-play toys already on the market that all subtly use branding to avoid coming across as educationally pious, stuffing science down your children's oesophagi.

Until Labo, Lego looked like the top-draw educational innovator with the release of Lego Boost, which includes the programmable Frankie the Cat and a rather attractive axe called Guitar4000. You can use the Lego Boost app on most phablets to program the toys to do things like play music or enjoy a good stroke *meow*. Unlike Labo, when you're done you can unpiece your Lego friend brick by brick and create something completely different from scratch. But poor Lego just can't beat Nintendo's cool-kid brand tie-ins to Super Mario or Legend of Zelda.

For something slightly more time-consuming and mentally intensive than Boost or Labo, Lego Mindstorms EV3 allows kids to jump into programming so that when they grow up they can become quants and afford a Switch. With a slight Decepticon aesthetic, these robots – including a vicious-looking snake and Mohican-coiffed bruiser – have an impressive list of movements and even respond to touch. But all this comes with a hefty £300 tag miles away from the essentially throwaway price point of the Labo. Mindstorms supports some impressive tech – an intelligent EV3 Brick with powerful ARM9 processor conveys commands to three interactive servomotors for some custom and nuanced movements.

It's not just STEM educators who are spellbound by the Labo. The arts have a precedent of using cardboard for ulterior and subversive purposes and while queuing to get into Banksy's Dismaland I had to endure a surreal stop-and-search at American artist Bill Barminski's cardboard security checkpoint. A new generation of fine artists, sculptors and packaging designers will surely use Labo to turn cardboard's industrial and commercial standard into conceptually amusing and idiosyncratic art. 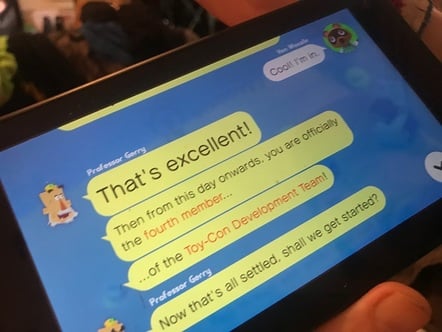 Those concerned about the insubstantial or fleeting nature of the Labo and its cardboard components need only to look at the lightning bolt of curiosity Nintendo has left in the collective gaming consciousness. There are hours of entertainment here, countless more of learning and experimentation. These manifold cardboard curiosities are fixable, customisable, recreatable. If it breaks, you can just repair it, and Nintendo even shows you how. Even the reflective tape used to signal the IR camera can be replaced with 3M tape found at WH Smiths. One thing kept quiet was just how much space you'd need after building these kits, and currently Reddit is crying out for someone to invent an innovative storage solution. Just don't mention a certain brand of flat-pack furniture.

Nintendo Labo Toy-Cons are proof nobody does it better than Nintendo. I can't afford the Toy-Con 02 robot suit yet, and I look forward to seeing where Nintendo takes the brand. Ideally, Toy-Con 03 will be on the shelves by Christmas, but if not you'll find me playing my cat piano arranging the lyrics "My name is Ozymandias, king of kings; Look on my works, ye Mighty, and despair!" to the Super Mario theme tune. ®