We already do bigger, faster arrays – now we're scaling up

DDN is upping array capacities and access speeds with one eye on its traditional HPC customer base and the other on businesses that are testing or deploying deep learning architectures.

AI, or perhaps more accurately Machine Learning, could be a gift that keeps on giving for storage and systems players as customers try to crunch through ever growing volumes of business data in a decent time. 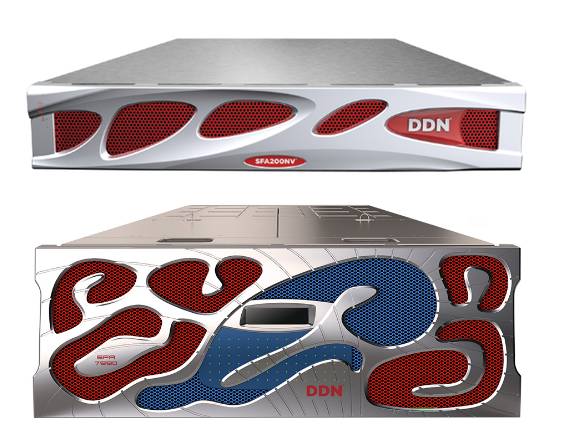 There are two hot flash boxes, the SFA200NV and 400NV (datasheets here), which have 2U x 24-2-5-inch bays that can use dual-port NVMe flash drives.

The 200NV has single CPU controllers and 8 x FC32 or 4 x EDR 40/100Gbit/s InfiniBand links. Performance is rated at up to 20GB/sec sequential read. 16GB/sec sequential write and 1 million IOPS.

The more powerful 400NV does up to 40GB/sec sequential read, 32GB/sec sequential write and 3 million IOPS, with dual CPUs/controller and 8 x EDR InfiniBand links. These numbers are for block access.

These 200NV and 400NV arrays can be used for block storage or function as EXAScaler and GRIDScaler building blocks.

Turning to bulk disk storage, the SFA7990 is an active/active controller, hybrid flash disk array with 90 x 3.5-inch drive bays for SSDs or, more likely, disk drives. That means, with 10TB drives, you get 900TB in 4U (225TB/U storage density – better than the SFA200NV/400NV) and, with the four supported 4U x 90 bay expansion cabs, 4.5PB in a rack. That's better storage density compared to flash and it's cheaper.

DDN wheels out big chungus of a storage box, the disgustingly scalable EXA5

Up to hundreds of petabytes per filesystem, thanks to Lustre

HPE gets carried array with HPC: Partners up with DDN

Squares up to Pure, NetApp, Cisco and Dell EMC