The SD Association, the industry body behind the SD card memory spec, has announced a new version 7.0 spec for its tech that makes the postage-stamp sized memory cards rather more interesting.

One is called “SD Ultra Capacity” and expands the maximum capacity of SD cards to 128 terabytes, well up on the current 2TB.

The other is “SD Express” which, by adding PCIe and NVMe interfaces , means the Association claims the cards can now hit 985 MB/sec data transfer speeds.

The new standards both retain the existing SD Card form factor, so will work in anything that can already read one of the cards. Not all devices will get the new speed, because adding NVMe and PCIe (versions 1.3 and 3.0 respectively) uses the second set of pins already present on ultra-high speed SD cards and not everything is built to hit those pins. 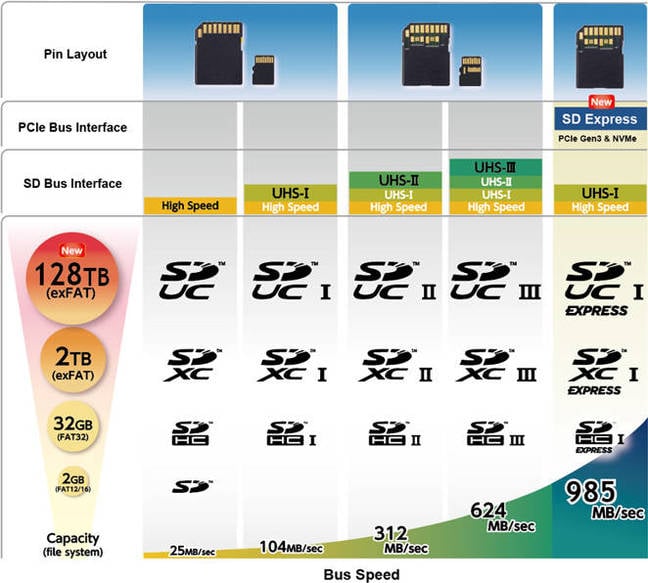 At 985 MB/sec the new spec isn’t far behind some enterprise-class SSDs. Sadly the SD Association’s technical data for the SD Express is members-only and its white paper (PDF) doesn’t say if the claimed speed is for reads, writes, or both. Previous SD Card specs have lacked wear levelling and other niceties found in enterprise SSDs.

So let’s not get too carried away with the suggestion that these new cards are “removable SSDs”, as the Association claims. Note, too, that the Association has suggested the following as applications for the devices: “super-slow motion video, RAW continuous burst mode photography, 8K video capture and playback, 360 degree video, speed hungry applications running on cards and mobile computing devices, ever-evolving gaming systems, multi-channel IoT devices, numerous automotive storage needs, to name a few.”

Consider, also, the potential of very fast and easily-replaced storage in all sorts of devices, and its plain that while SD Card arrays are probably not likely any time soon, some very interesting storage machines could follow this new standard. ®