Decision time for AI: Sometimes accuracy is not your friend

When intuition lets you down, you're stuck between ROC and a hard place

Machine learning is about machines making decisions and, as we have already discussed, we can produce multiple models for any given problem and measure their accuracy. It is intuitively obvious that we would elect to use the most accurate model and most of the time, of course, we do.

Has your machine really learned something? Snap quiz time

But there are times when we will actually elect to use one of the less accurate ones. The underlying reason is that the estimates we make of accuracy, whilst very useful, take no account of the cost of being right and being wrong.

So, just to recap the story so far. We might be trying to identify which of our customers on a clothing website are women and which men so that our recommendation engine makes the appropriate clothing suggestions. The model can be right about a given individual in two ways:

It can also be wrong in two ways:

Note that in this case we are assuming that an identification of female is considered positive. The logic works equally well (except the classes are reversed) if we assume male is positive. 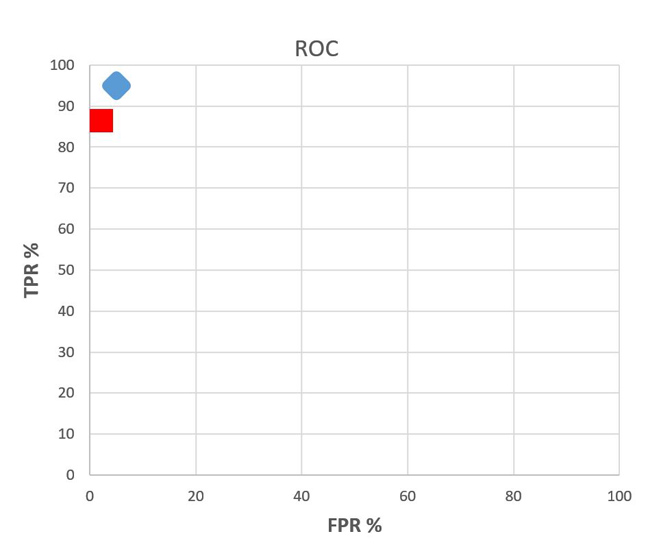 But suppose – and this is merely supposition – most men will decide not to shop with you anymore if your algorithm incorrectly identifies them as women and recommends women's clothes to them. Let's say when your system makes the same mistake in reverse for women, they mostly stay loyal customers.

So, in this case, the consequences/cost of a false positive far outweigh those of a false negative and we may well favour the second algorithm even if it is less accurate overall.

Now trying to protect the fragile egos of some males is all very well but, as the stakes are raised, we have more and more reason to take account of the differing costs of false negatives and positives.

For example, suppose our algorithm is looking at a vast amount of data and making a decision about whether a person has a disease. A false positive (the person is actually fine but the algorithm says that they have the disease) may result in a wasted course of treatment that costs £50. A false negative (the person is infected but the algorithm says they are fine) may result, not only in that person's potential death, but in, say, 100 more cases as that person spreads the infection.

And, even if our algorithm is 98 per cent efficient, two of those 100 will not be spotted and will infect another 200 and so on. Looks like we’ve got ourselves an epidemic and all because the "costs" of false positives and negatives are wildly unequal.

So, one thing to bear in mind is that ROC space (brilliant though it is) takes no account of the cost of the two types of error that we have.

We also have to bear in mind that the efficiency of the algorithm is not the same as the probability of it working in a given case.

So we go live with the algorithm and start feeding the new claims into it as they arrive. We know from other work that only one claim in a thousand is fraudulent so most of the claims are flagged as honest. We wait patiently and, after three days, a claim is flagged to us as fraudulent. The crucial question is: "What are the chances that the claim is actually fraudulent?"

Clearly the obvious answer is 99 per cent and equally clearly that is going to be the wrong answer otherwise I wouldn’t have raised the question. The correct answer is that it has only about a 9 per cent chance of being fraudulent, not 99 per cent. At this point you may want to stop reading and work this out for yourself.

So, back to our three-day wait and the first claim that is flagged as fraudulent. It actually only has about a 9 per cent chance of being dishonest, despite the fact that the algorithm is 99 per cent accurate.

This is initially unintuitive but it is correct. And if you really want to work in machine learning, it is important not just to be able to solve this single problem, but to get a feel for how and why it works.

So, here are another couple of brainteasers to assist you toward a zen understanding of the problem. In this case we intuitively expect 99 per cent because that is the efficiency of the algorithm but instead we get 9 per cent.

What is the factor that makes the number we get different from the expected?