Australian researchers have managed to store information on light-emitting nanocrystals, and they reckon a cubic-centimetre chunk of the stuff could hold a petabyte of data.

The base tech is described in "Towards rewritable multilevel optical data storage in single nanocrystals" in Optical Express.

It hinges on the nanocrystalline alkaline earth halide BaFCl, which is a phosphor, doped with samarium ions. These nanocrystals have a size of around 300 x 200 x 50nm. In the experiment the crystals were deposited on a 1cm x 1cm silicon wafer. 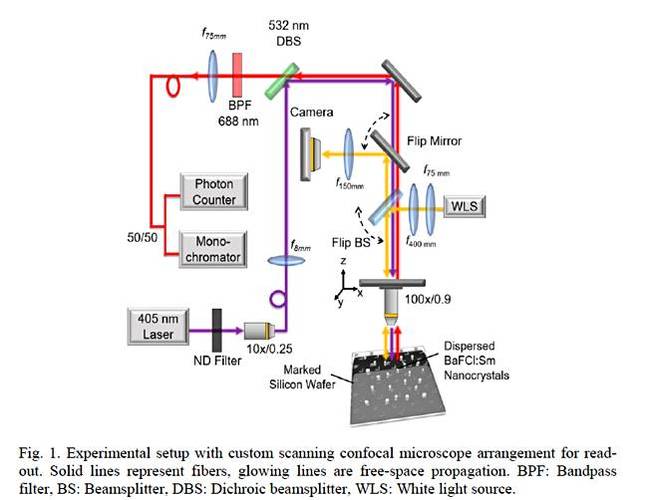 Such crystals can change their valence state from BaFCl:Sm3+ to BaFCl:Sm2+ under exposure to UV-C light, generated by inexpensive blue-violet laser diodes. This change is reversible, meaning the substance is rewriteable. The valence state can signal a binary one or zero.

The research, led by Nicolas Riesen of the University of South Australia and Xuanzhao Pan of the Institute for Photonics and Advanced Sensing (IPAS) and School of Physical Sciences at the University of Adelaide, stated:

"The stored information is then read out using confocal optics by employing the photoluminescence of the Sm2+ ions in the nanocrystals, with the signal strength depending on the UV-C fluence used during the write step." Confocal optics* enable reading the light value from a single crystal. 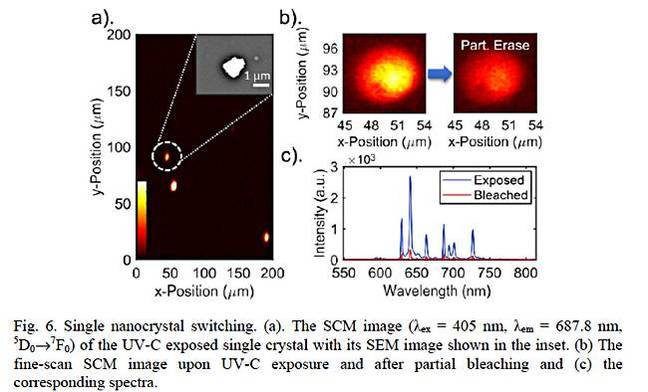 "The read-out speed in the experiments was limited by the basic 2D XY scan implemented. The read speed was slow at 10 minutes for a 200 × 200 µm2 area. In practice, however, it is expected that the read speed could exceed that of Blu-ray technology by at least a factor equal to the number of bits in the multilevel encoding when employing a similar technology.

"The optical pick-up (OPU) of e.g. BD and DVD players is essentially in the same confocal arrangement and so a reader closely resembling these well-established consumer technologies could in principle be used for compact 2D read-out."

The authors noted that the 10 minutes write time "can be reduced to nanosecond timescales using a higher-power UV laser source".

They carried out three write-read-erase cycles on the wafer material.

Multilevel encoding, conceptually similar to 2bits/cell and 3bits/cell flash, may be feasible "by discretizing the level of valence state switching by adjusting the UV-C intensity for the conversion".

The number of levels could be extreme. "It can easily be envisioned that hundreds or even thousands of levels could be encoded if a sample consisting of a thin film of nanocrystals of e.g. ~10μm thickness can be directly exposed with the confocal microscope."

The authors support this claim by noting that "BaFCl:Sm3+ has a large dynamic range for the Sm2+ signal that is induced by the photoreduction, and the growth of the Sm2+ signal is linear over several orders of magnitude."

Also: "It is expected that multilevel data storage would be possible for smaller nanocrystals down to 30 nm."

It could also be readily extended to 3D, which would permit ultra-high data densities of the order of many TB/cm3 if hundreds or even thousands of levels are encoded. The platform would also permit fast parallel read-out as a result of the multibit encoding. In principle, super-resolution microscopy could also be used to minimise the writing pitch to about 30 nm, potentially allowing for up to PB/cm3 data storage. To completely switch a 30 nm nanocrystal over its entire linear range, we calculate that a minute 5 × 10−12 J (5fJ) is needed.

The mind boggles at the possibility of 1PB/cm3 given the writeable surface of a DVD-sized disc. But then the disc's rotation speed has to be super-constant and the read:write head movement super-precise so that the positioning, depth and timing of head laser firing can match the nanocrystal sizing and layering.

Although the optical material and read, erase and write processes may be feasible, the mechanical and electrical engineering precision and operational tolerances required may well make multi-PB optical disks unachievable. ®

*An explanation of confocal optics can be found here.