Folks relying on mains-powered alarm clocks had an excellent excuse for turning up late for work on Friday in Seattle – after a raccoon knocked out power to a chunk of the northwest US city.

On Thursday evening, the marauding mammal made its way onto the property of municipal power generating company Seattle City Light and, as raccoons do, started exploring. While investigating the area, the prying procyonidae made a fatal misstep. It tiptoed onto live connectors in a substation, knocked out the power, and now it's very much a crispy critter.

"We have determined the cause of the outage," said Seattle City Light reps in a statement. "A raccoon made its way into the bus work of the South Substation, causing an arc flash and ultimately this large-scale outage."

Around 6,000 homes were left without power while crews worked to retrieve the singed scavenger's corpse, and reset circuit breakers and fail-safes across its network. All power systems are now functioning normally, and the raccoon has been chucked in a bin somewhere laid to rest. 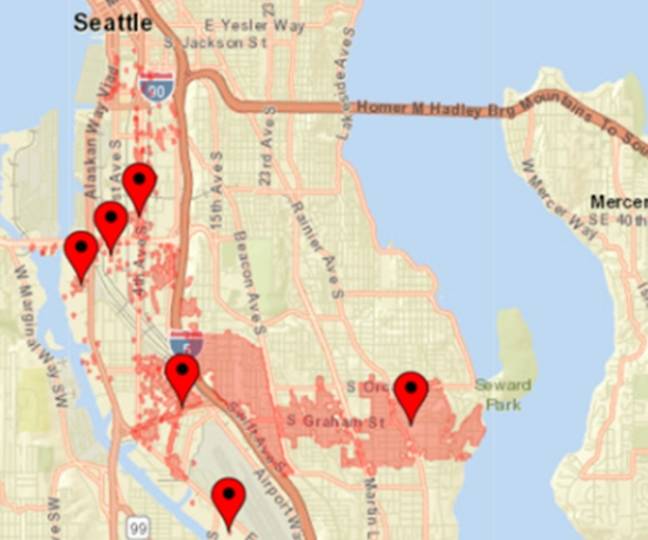 Amazing what a trash panda can accomplish ... the outage across Seattle last night marked in red

Despite some wildly over-hyped claims about hackers bringing down electrical systems, it's still animals that are mostly responsible for non-mechanical power outages. To highlight this noted infosec guru and white hat hacker Cris Thomas, aka Space Rogue, set up the CyberSquirrel1 project tracking such incidents.

According to his data, raccoons have been responsible for 106 outages in recent history. Squirrels, as the name of the project suggests, are the top killer of power grids, followed by birds – which can either cause them by landing on the wrong line or with long streams of excrement known as streamers – one of which knocked out a nuclear power station.

Not even the largest projects are immune. In 2016, the Large Hadron Collider was shut down when a beech marten chewed through a transformer's power cables. As with the Seattle raccoon, the beech marten ended up fried: animals and electricity don’t mix. ®

That was quick: Seattle rushes to kill tax that would mildly inconvenience Amazon

Careful not to trip while backpedaling, Mayor Durkan

Secrets in Seattle: Apple opening base on Microsoft's doorstep

And, oh look, Anonymous returns. Completely forgot all about them