I see you're trying to leak a file! US military seeks Clippy-like AI to stop future Snowdens

Needs the ability to cope with Microsoft docs without breaking 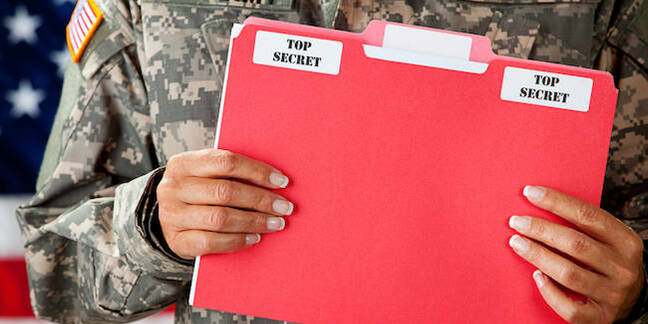 The US Department of Defense is exploring whether or not it's worth using artificially intelligent software to suggest levels of classification for information – and control who gets access to it.

A sneak peek into the military's formal request for ideas on the matter, filed back in May, and the recent responses from tech suppliers, give hints at how such a system would work.

“To continue to securely create, access, process, manipulate, and monitor information, DoD CIO has the need to identify potential sources that can provide a commercial off-the-shelf [solution] to implement discretionary access controls on top of the currently established mandatory access controls,” the department's officials wrote in their requirements.

It’s tricky determining how sensitive intelligence information really is, and how it should be classified: whether it should be secret, top secret, and so on. It’s something machines can’t quite do yet considering they have no real understanding of human text.

Thus, it's still up to government analysts to mark intelligence reports and documents under specific labels according to internal rules, policies, and operations. It's reasonable to assume, though, that machine-learning technology could be used to suggest levels of classification, as well as automatically monitor and log records of who accessed files, where they were accessed, which systems were used to access the materials, if any changes were made, and whether that person really had a need to know the contents.

And presumably raise the alarm if something untoward is detected.

“The tool will require the user to ultimately define a security classification marking but might offer suggestions based upon dirty words or internal classification markings,” the Pentagon officials wrote in their requirements, describing some kind of Microsoft Word Clippy assistant but for intelligence analysts.

All of this should be packaged into a clean and non-confusing user interface so that the Dept of Defense can be sure materials are only shared with trusted personnel and organizations within the department, and with external companies, too. The system also has to cope with up to 25,000 users at any one time.

Ideally, the AI would be able to deal with any type of file that can be opened using a Microsoft operating system or product, specifically “MS Server, SQL, NetApp Storage, MS Office, MS Exchange, and Skype for Business.” At a minimum, “the software must work with Microsoft Office products, including Outlook/Exchange, SharePoint, and Lync.” The platform should also be used via “software collaboration tools” rather than being a standalone network or service itself.

It may – may – also be able to prevent the next Edward Snowden-style or Reality-Winner-esque leaks with neural-network-powered access controls.

However, it looks as though Uncle Sam has been swept up in the whole AI hype. Its tax-collecting division, the Internal Revenue Service, also recently filed a request for information to see how machine-learning technology could be used to secure taxpayers' records on its servers. ®

US Department of Defense to sling an estimated $3.17bn at Microsoft resellers

US Department of Defense to fling $1.76bn at Microsoft

Enough to build a Wall.... of Windows consultants around Washington

Penta-gone! Personal records of 30,000 US Dept of Defense workers swiped by miscreants

Pair on cyber-espionage rap, HPE, IBM and their clients said to be among those hit

Slabs, laptops and phones to get Microsoft's latest OS within a year

This is not the cloud you're looking for.... Oracle's JEDI mind tricks work as Trump forces $10bn IT project to drop out of warp