And emits another video that doesn't reflect reality

Augmented reality unicorn Magic Leap has finally revealed the specifications of its upcoming AR headset, and promises it will be available this summer.

It also put out another video demonstrating the system at work, showing how developers will be able to place moving content so it appears to exist in the real world.

Having been stung last month when a "closer look" at the device comprised of no more than a marketing manager placing the goggles on her head and taking it off again, this week, the company brought out several engineers to talk things through.

As a result, the live stream comprised real information rather than marketing nonsense and helped to explain why companies keep piling money into the unproven startup.

We learned, for example, that it will use an Nvidia "Parker" Tegra X2 which contains: a quad-core Arm Cortex-A57 CPU cluster, a dual-core Nvidia Denver 2 cluster, and an Nvidia Pascal-based GPU with 256 CUDA cores. Nvidia sees the TX2's main use being for self-driving cars and "digital cockpits," so it has plenty of processing power.

Hardware grunt will be divided between the system and the developer, Magic Leap said – the system gets two of the A57's four cores and one of the two Denver 2 cores – and the rest can be used by developers how they wish. In that respect the headset will be more of a console than a PC.

And we got to see a real-world use of the system through a demo video that looks a lot better than previous demos: a rock-throwing character, in color, with shadings.

Now about those videos

Magic Leap has some history with misleading videos: it paid a Hollywood special effects company to produce some incredible images and strongly implied it was a real experience – something that no doubt helped bring in investors – but it was all fake.

Recently, Magic Leap has been putting out videos that it says are "live on device" which it describes as "footage that is captured on-device" where they "take over the camera and composite the digital footage."

What that means is that the software for creating the images works, and the hardware is capable of handling it and showing it. But it also highlights the real problem: that the actual experience of wearing the Magic Leap One headset and seeing the images is far from ready. 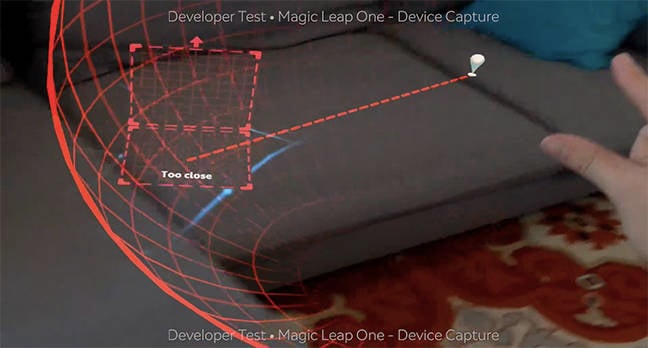 The latest video showing some cool software that theoretically works

As we outlined months ago, we've come to believe that the system is not able to deliver to a smooth experience as you move around. We predict there is a lag in the actual movement of headset sensors and the images you see while wearing the headset. Something that a user would experience as frequent jumps in the position of virtual objects in the room.

In other words, if you sit dead still and don't move your head, you will experience something close to the videos that Magic Leap keeps putting out. But move and the images lag – something that would be quite disorientating.

That would also limit what you can do with the system: virtual objects can't be very far away – because a small jump would be much more noticeable – and they can't move very fast – because the system would be unable to keep up.

We also suspect that the device's field of view is so narrow that it feels a little like looking through binoculars, and you will only be able to use the system in a room with little or no sunlight.

In other words, the concept is great but the reality sucks.

And reflecting that odd disparity – where everything but the actual experience is great – is the weird way that Magic Leapers talk about their product. They constantly imply they have used the device as intended but never clearly state that as fact.

The best example of this odd behavior in this particular video is at 47 minutes in when "lead interaction and experience designer" Colman Bryant is asked if the system includes the ability for multiple people to see the same content at the same time. He says that they haven't included multi-player into the system but notes that it is theoretically possible.

"We did not implement multi-player in this but there's no reason you can't. Your devices is at its essence – there's a computer in there, it can talk to other computers – so we can build multi player experiences and we'll be showing more down the line," he responds, clearly stating that the system does not currently allow for multiple people to see the same content at once.

But then, his fellow Leaper on the couch next to him starts talking about it as if they actually have run the system with multiple people seeing the same content.

"Multi-player is a ton of fun," he says. "As soon as more than one person is interacting around the content, you're seeing the same thing in the same room – that is just a magical moment right there."

Which is a weird construction seeing as seconds earlier they appeared to acknowledge that they had never actually experienced what they are now describing. Bryant grabs this made-up memory and runs with it.

"Oh yeah it really makes it all comes together. You don’t feel like this crazy person looking at this magic thing that other people can’t see - you're sharing experiences," he says. "You're looking up like 'did you see that?'; 'Yeah, I did.'"

This strange behavior where Magic Leapers talk about something theoretical as if they have experienced it is a peculiar cultural habit that stems directly from CEO Rony Abovitz.

Abovitz routinely talks about things that he hasn’t actually experienced in a way that strongly implies that he has – as if the thought of the experience itself is so powerful that it pierces the veil of reality and becomes tangible.

But, of course, it doesn't.

If Magic Leap One does in fact launch this summer and costs, as predicted, hundreds of dollars, people will actually want it to work as described.

It's all well and good Magic Leapers blowing their minds with what is theoretically possible, but as soon as you go from being paid to dream, to asking people to hand over their hard-earned cash to experience the dream, it needs to exist beyond someone's head and heart. ®