No, seriously, why are you holding your phone like that?

Something for the Weekend, Sir? I don't like to do it sideways. I won't do it at any fancy angle. Call me conventional but what can I say? I'm a straight-talking kind of guy.

How hard does it have to be to get a firm grip on it… and hold it against the side of your face?

Oh right. Put that yoga manual down, you might have misunderstood my meaning. I was describing how I handle my mobile during a phone call: I lift it close to my cheek so that the tiny speaker near the top end roughly aligns with my ear, then speak normally so that the sensitive directional mic at the other end can pick up my verbal intonations while compressing background noise.

On occasion, I'll be wearing earphones, in which case the smartphone remains in my pocket, my lap, my left hand or wherever while I let the mic dangling against my jaw collect the vocal vibrations.

Just recently, I have noticed that I have been doing it wrong all these years. Looking around on my commuter train, in the streets and in my favourite hipster cafés, I can see that everybody else employs the following smartphone handling method to listen to what a caller is saying: 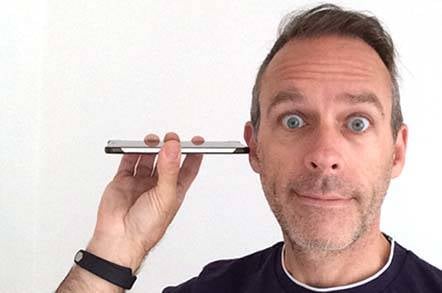 At first, I imagined this might cause a problem: surely if you hold your phone this way, the compressor mic is now situated several inches away from your head. This means it is less likely to pick up the thoughtful words you are saying than the verbal bollox of the moron sitting next to you.

Silly me. Apparently, whenever you want to talk, all you do is swivel the phone round like this: 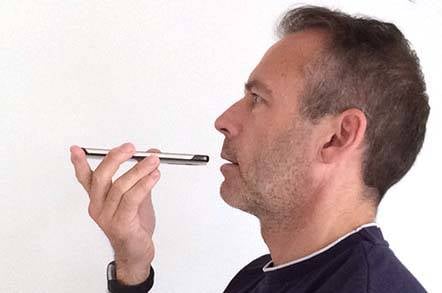 I guess I'm just old school when it comes to telephones. I was raised by analogue wolves in the Neobakelite era in which a telephone was a heavy plastic club attached to a big box by a spiralled cable that would mysteriously and spontaneously twist itself into Gordian knots between calls. You spoke into one end of the club and noises came out of the other, and you held it against your head to experience both simultaneously.

Much later, I can remember interviewing a senior technician at Motorola who expressed his frustration at the public misconception that mobile phones had to be long enough to stretch from ear to mouth. As cab drivers and on-the-road sales executives already know, a mic can pick up your voice as vibrations through your jaw. The mic doesn't have to be pointing at your mouth, it just needs to be anywhere alongside your cheek.

In fact, the only reason Motorola kept making flip phones, the technician assured me, wasn't to extend the device from ear to mouth but because someone high up at the company was a Star Trek fan.

Having just returned from the Annual Dabbsy Trek into the Great Jungle Beyond Brexit Borders, I think I have found where this fashion for holding smartphones at right-angles to your head comes from. It is an affectation that has entirely consumed the European continent.

This comes as no surprise. Europeans interact with their tech gadgets in ways that can only be described as "foreign". As a British visitor, you just have to take it in your stride: remember to wear your pith helmet, don't drink the tap water, and don't stare at anyone holding their phone in an unnecessarily elaborate manner during calls.

For readers unfamiliar with the peculiar European way of things, consider the sorry French tale of the Linky.

While lots of us at home volunteered to accept a government-backed offer to have a free generic smart meter fitted in our homes to tot up accurate energy usage, the French authorities decided to inflict the installation of the little buggers on their population by diktat. Smart meter installation engineers in France have been given unprecedented legal rights to enter private properties without permission, break open locked energy meter cabinets and fine citizens who deny them access.

Unlike acquiescent Brits, whose upper lips might be stiff but very little else is, the French won't be told what to do. And to make matters worse, their government insisted upon a unique type of smart meter for everyone - a creepy energy spy in a snot-green box - and allowed it to be given the name "Linky", thereby giving angry citizens a collective focus for their somewhat misguided ire. The Stop Linky campaign even has its own logo, local organisational units around the country and a YouTube channel.

What are French citizens getting so upset about? Well, they believe Linky is prying into their daily habits - what time they get up, how many coffees they make, when they go on vacation, how long they spend in the shower, etc - and sell the data to corporations who will target them with adverts for coffee, holidays and soap. Worse, they fear the energy companies will collaborate with the government to send consumers text messages telling them to turn their thermostats down and put on a jumper instead.

Cue marches through the streets and outraged French citizens attacking Linky boxes with axes. You have to admire their collective will even if it is all jolly silly, and it is a perfect illustration of how bally foreigners approach domestic technology. Keep that gaffer tape on the smartphone camera lens - it'll steal your soul!

Given that I will not be able to hold back the tide, I have decided to embrace the new ways of holding my mobile phone. In fact, I think I can embellish them with further options. Here, for example, is my suggested Continental method for watching video podcasts of Love Island. It lets you see right inside the video: 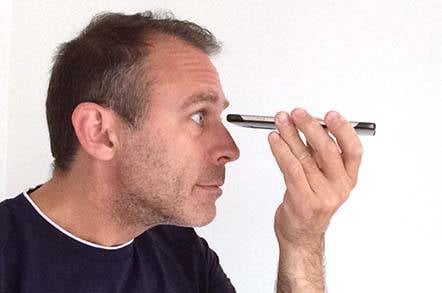 Mind you, if you are the type of person who watches such prolefeed, you will certainly want to share your lack of intelligent thought processes with as many fellow mindless drones as possible. So allow me to suggest the following method of watching, which although you can't see the screen yourself, you force everyone else to see what an utter knobhead you are: 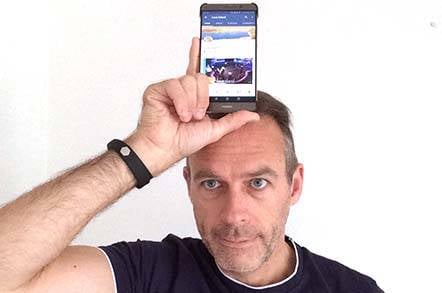 Or if you are listening to music without earphones, as almost every fucker insists on doing on the train these days, here's how to listen in stereo: 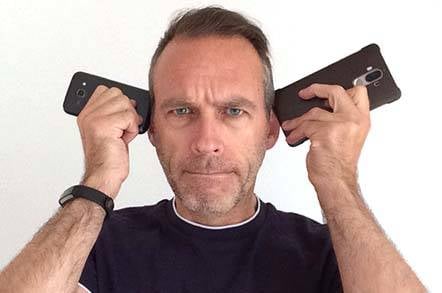 Just sound and vision? Nah, let's get more senses into the act. Try interacting with your smartphone nasally: 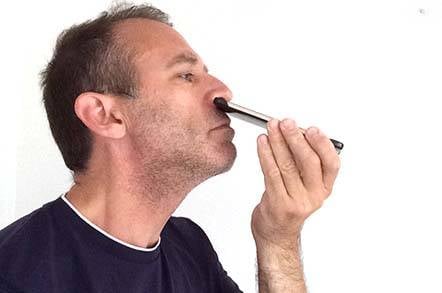 For stylistic variety, I have already registered a couple of variations on the nasal theme. Here's 'The Adolf' ©: 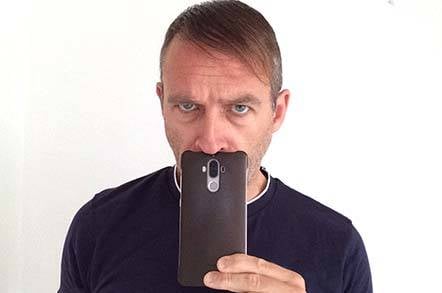 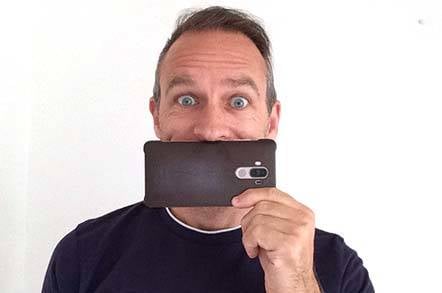 And for those who insist on using their phones for commenting on the inane writings of Friday columnists at The Register, I'll leave you with 'The Dabbsy' ©: 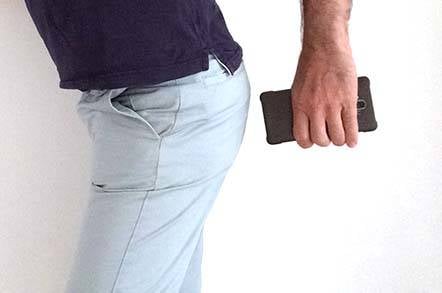 There are plenty more where those came from… unfortunately. Now it's over to you to handle your handset and manipulate your mobile. Feel free to show me what you've got.

Alistair Dabbs is a freelance technology tart, juggling tech journalism, training and digital publishing. He plans to expand his initial foray into smartphone handling to other areas of creative device interaction. Forthcoming techniques from Dabbsy Developments include typing on a keyboard using your elbows, angling your computer display to face the ceiling and manipulating a touchpad using the small of your back.