Microsoft still longs to be a 'lifestyle' brand, but the cupboard looks bare

One is that if the company focuses on growth areas in enterprise, without expensive distractions, then revenue and profits shoot through the roof. That much is evident in the fiscal '18 earnings. Microsoft made the cloud another platform, and as the world dismantled its in-house IT, has been able to hoover up the fat margins made by integrators and consultancies.

So by this argument, if Microsoft eschews lifestyle products and services, it's relevant again!

The other, though, is the nagging feeling that without a strong consumer or lifestyle presence, Microsoft risks becoming a Wang or a Computer Associates – a B2B brand miles from the bleeding edge. The "consumerisation of IT" over the past two decades has rewarded companies that engage with tech-savvy professionals who bypass their fading IT departments, and introduce new technology products and services into their organisation. It's punished companies who don't.

So by this argument, if Microsoft embraces lifestyle products, it's relevant again!

You don't need to be Aristotle to see that resolving these two important strategic trends requires nimble footwork. It's not surprising that Microsoft wants to have its cake and eat – it always has. The original "computer on every desktop and in every home" mantra retrofitted to Bill Gates hasn't entirely given way to more modern waffle about cloud empowerment and experience (rearrange those buzzwords any way you see fit, dear reader). So in recent years Microsoft repeatedly emphasised that people took their work home with them, for example. That was a rhetorical stretch that spanned enterprise and the home, sort of.

On the earnings call, we found Microsoft CEO Satya Nadella talking up how people use Office at home now. This is actually a great example of making Office so cheap that more people use it. There's no point even in pirating it, an Office family pack is much cheaper than the household Netflix sub. (Adobe too has made subscription access so cheap that pirating seems petty.)

"Office consumer revenue increased 8 per cent and 6 per cent in constant currency, driven by recurring subscription revenue and growth in the subscriber base, now at 31.4 million," but that was lip service really – the only mention of "consumer" in the entire call. And the L-word ("lifestyle") wasn't mentioned once.

From Mary Jo Foley we learn that the desire still burns bright. Last month Microsoft appointed Yusuf Mehdi as "Corporate VP of Modern Life and Devices" and it's Yusuf's job to square the circle.

His biggest problem, Mary Jo drily noted, is Microsoft itself.

And I'll be kind, and not even mention this: 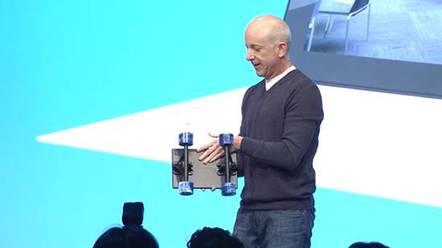 And certainly not this:

Thanks to Xbox, Microsoft is still a household name and brand. Surface has enhanced that brand with affluent and creative professionals. With a budget education Surface, that appeal will widen. This as ever is a good platform on which to target those influential "prosumer" types.

But Microsoft is sorely lacking the services and clever and useful ideas that people might actually use on a daily basis, no matter where they work. Any ideas? It looks like Redmond could use some.

Otherwise, we can expect to see Microsoft increase its focus on cloud and enterprise and value-added business services, like analytics. It would be daft not to. Yusuf Mehdi must have the least enviable job in Redmond. ®