That sound you're hearing is eyebrows raised into orbit 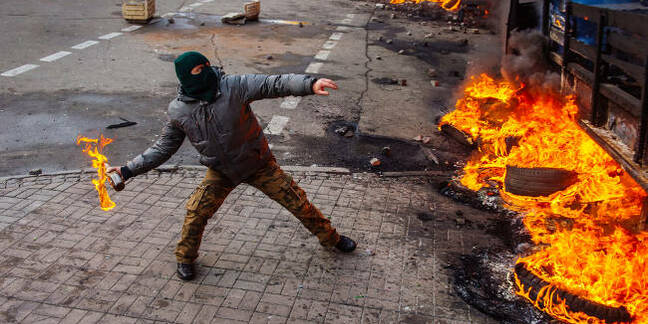 Amazon's UK chief Doug Gurr has claimed Britain will descend into "civil unrest" in weeks if it leaves the EU with no trade deal in place.

Gurr made his comments during a business leaders' meeting in England last week with new Brexit Secretary Dominic Raab, according to The Times.

He is reported to have told the meeting, which took place at Chevening House in Kent, that the possibility of the UK exiting the EU minus a trade or customs agreement next March was part of his corporate contingency planning.

Amazon refused to tell The Register whether it had any vision of a successful post-Brexit trade environment. Instead it gave us a prepared statement that played down the impact of any eventuality:

"Like any business, we consider a wide range of scenarios in planning discussions so that we're prepared to continue serving customers and small businesses who count on Amazon, even if those scenarios are very unlikely. This is not specific to any one issue — it's the way we plan for any number of issues around the world."

Unsurprisingly, the government has also talked down Gurr's vision of how the UK would fare being outside the political bloc, with a spokeswoman telling The Guardian: "Where is the evidence to suggest that would happen?"

In the run-up to the referendum itself, a number of big tech companies' UK tentacles came out as pro-Remain, and told their staff to vote against leaving the EU, including IBM, EMC and Cisco, and Microsoft and HPE.

UK-EU negotiations over the terms of the UK's withdrawal are about striking a deal that preserves access to each other's markets for trade, with one of the disagreements being over whose rules should govern that deal. Other potential stumbling blocks include the hard border between the UK and Ireland and the powers of the European Court of Justice.

If the two sides cannot agree in eight months then the UK will leave without a deal being in place. This causes the economic relationship between the two to revert to World Trade Organisation rules instead of potentially more favourable rules negotiated as part of a Brexit deal with the EU.

So far the UK's political establishment has been totally unable to agree among itself whether the UK will actually leave the EU at all, or whether it will remain under the jurisdiction of EU courts and subject to EU rules on goods and services.

Some commentators refer to this scenario as Brexit In Name Only, or BINO. Other options include leaving the EU in full and instead taking up membership of the European Free Trade Area, as well as adopting variations on EU trade deals negotiated by Canada and Norway, among others. ®