Google answers 'Why Google Cloud?' with services and spectacle 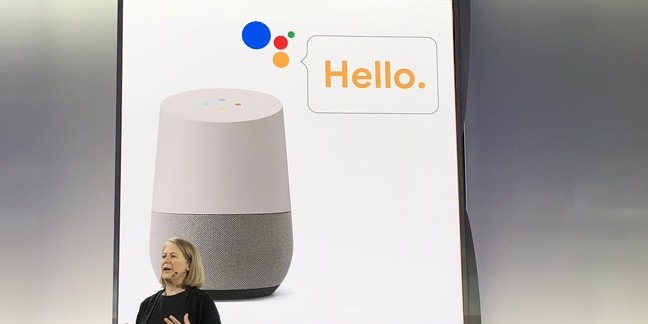 Is it me you're looking for? ... Diane Greene on stage

Amid ongoing renovations at San Francisco's Moscone Convention Center, Google Cloud Next '18 opened on Tuesday, the scent of new carpeting and paint still lingering in the air.

Rebranded in 2016, what was previously a modest, unassuming tech gathering has been stuffed with cash and transformed into a top tier show, one that clearly aspires to the shock and awe of AWS Global Summit, Dreamforce, and Oracle OpenWorld.

The partially rebuilt convention center serves as a fitting visual representation of Google's cloud business, promising but not yet on equal footing with AWS or Microsoft Azure, at least when measured by revenue or market share. In terms of technology, Google has a stronger hand to play.

Diane Greene, CEO of Google's cloud business, was delivered to the stage via a rotating booth, rather more theatricality than the usual executive walk-on.

Her mission was to answer the question, "Why Google Cloud?"

For those in the audience who looked over their shoulders, Greene's remarks were easy to anticipate, thanks to visible teleprompter screens suspended from the middle of the hall. Consider it a step toward transparency.

"If you look back a few years, infrastructure was like driving around in a horse and buggy," McNamara said. "Today, you have three performance cars parked in the driveway."

McNamara offered a rather vague answer: Target and Google share a lot of values, and Google is committed to open source (something lock-in averse companies appreciate). However, the same could be said about Amazon or Microsoft.

Ultimately, he ducked the question. "At the end of the day, it wasn't me who chose Google, it was my engineers," he said.

No doubt Greene would have preferred a more emphatic declaration of GCP superiority.

But the point of customer-win examples, like Target and Unity (which we were told jumped ship from AWS to take up with Google Cloud Platform), is to show that companies like what they see in GCP, whatever the actual reason may be.

Perhaps Greene's answer – "We've been working incredibly hard to build things for you" – will suffice. It worked for car rental biz Avis, with its 1962 "We Try Harder" ad campaign: "When you’re only number two, you try harder." More so when you're a distant number three.

Greene observed that while she's proud of Google's cutting-edge technology, she's also proud of having introduced the basic features necessary to play the enterprise game. Two years ago, when Greene was hired, crucial things like full audit logs, compliance stuff, and fine-grained security – the things big biz IT really cares about – were missing. Now Googlers are working on that. So, why Google Cloud? Because Greene taught Google listen to enterprise customers and to make them feel comfortable.

PS: Sundar Pichai, Google's CEO, made a brief appearance to say not very much, as he did on Monday's Q2 2018 earnings conference call.