Psst, says Qualcomm... Kid, you wanna see what a 5G antenna looks like?

Pic Qualcomm is getting ready to ship one of the relatively boring bits of the 5G puzzle – well, perhaps boring for you, but fascinating for electronics geeks: a compact transceiver/antenna combo that fits inside phones to provide 5G millimetre-wave communications.

Mm-wave transmissions are a crucial part of ultrafast next-generation mobile broadband, aka 5G: carriers with multi-gigahertz millimetre-wave bands can transfer more data per second over the air to and from handhelds and cellular towers, and handle more devices at once, than today's 4G/LTE technology.

The trouble is that mm-wave communications don't have much range, are quite narrow and focused, and can't penetrate walls and get into buildings. A suitable transceiver and antenna array on a phone needs to do a lot of work – such as finding and steering signal beams no matter which way up you're holding the thing, and deal with weak signals bouncing off people, cars, trees, and so on – all to maintain a decent connection to the nearest phone mast.

And it has to be small and low power enough to fit inside a smartphone. In fact, more than one needs to be in there so the signals still get through regardless of how you're holding the phone: your hand will block the transmissions of one module, leaving the others to do the job. It's that fiddly and weak.

On Monday, Qualcomm revealed its mm-wave 5G antenna technology and transceiver, both designed to work with the company's Snapdragon X50 modem, and fit inside handsets. Qualcomm techies have also been closely working with phone mast makers, carriers, communications watchdogs at national regulators, and software developers, to optimize their 5G gear and apps for its 5G stack.

In other words, if you're competing against Qualcomm in the radio modem world – cough, cough, Intel, MediaTek – be aware it is working closely with cell tower equipment makers and mobile networks to tune the positioning and output of their mast antennas so that mm-wave 5G works well with Qualcomm's particular miniaturized smartphone antenna arrays. Qualcomm really wants to be first out of the gate with 5G so that public infrastructure is optimized for its hardware, and not its competitors. 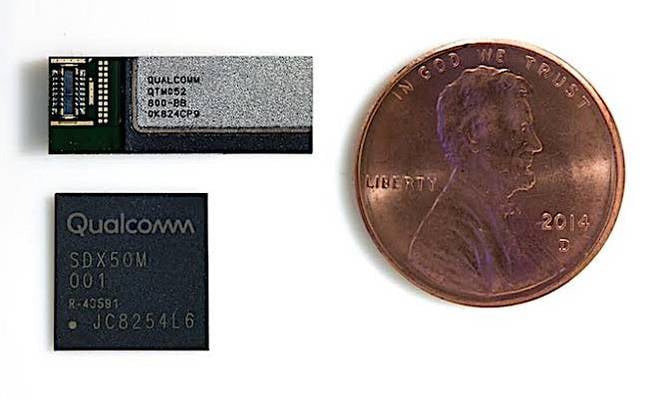 These, Qualcomm explained, improve both the range and reliability of the signals. The QTM052 modules include a 5G NR transceiver, power management circuitry, RF front-end components, and a phased antenna array. The modules support up to 800MHz channel bandwidth in 26.5GHz to 29.5GHz spectrum, and also cover the 27.5 to 28.35GHz and 37 to 40GHz bands.

Qualcomm reckons four of the QTM052 units can be packed into a smartphone. Samples of the radio modules are in the hands of phone designers right now, we're told, and Qualcomm said it expects device makers to launch QTM052-equipped devices in the first half of 2019.

There's also a four-member family of radio modules designed for larger cell 5G coverage – that is, outside the dense urban areas and indoor environments targeted by the QTM052 devices. The QPM56xx RF module family (QPM5650, QPM5651, QDM5650, and QDM5652) work with the Snapdragon X50 modem to work in the sub-6GHz bands:

Qualcomm took the occasion of the launch to fire a broadside at Intel, a challenger to Qualy's cellular modem crown. In a blog post this week, Qualcomm claimed smartphones using its Snapdragon 845 system-on-chip have “up to 192 per cent faster data” transfers over mobile broadband than Intel-modem-based “non-Android smartphones.”

Qualcomm doesn't name the brand of the non-Android smartphones – cough, it's Apple's iPhones – it merely said smartphones using its Snapdragon radio electronics outpace handsets that use Intel's XMM 7480 and XMM 7360 cellular modems (really, they mean iPhones: Apple uses a mix of Intel and Qualcomm parts, and Qualcomm would rather Apple uses just Qualcomm).

Qualcomm got its figures from netizens performing about a million tests using the internet speed-testing tool Ookla, which gathered up the numbers, anonymized and grouped them, and gave them to Qualy. The results were taken from Snapdragon 845-powered 'droids and unnamed Intel-powered mobes on the AT&T and T-Mobile US networks in America. The numbers are said to have been signed off by Ookla rather than have been cherrypicked by Qualcomm. Ookla can, we're told, detect what device model and chipset you're using.

In all, Qualcomm wants phone makers to use its chips for cellular connections, and not Intel's and MediaTek's, regardless of the legal brouhahas surrounding its components. And it says its stuff is way ahead of the pack. ®