Analysis Semiconductor analyst David Kanter has identified six areas of ignorance about Intel's Optane DIMMs where clarity will dictate whether they become popular or not.

Optane is a brand name for Intel's 3D XPoint memory, the storage technology that can be found in its P4800X series SSDs. The name has been slapped on Intel's forthcoming byte-addressable persistent memory DIMMs, which have a DDR4 bus interface that's faster than the P4800X's PCIe 3.0 x4 interface. They are sampling now in 128GB, 256GB, and 512GB capacities.

He said Skylake Xeons have had two instructions added – CLFLUSHOPT and CLWB – to force data to be written back to persistent memory from the internal CPU core caches at high speed.

Intel and the Storage Networking Industry Association have helped create a persistent memory programming model with four ways for app developers to use Optane DIMMs: 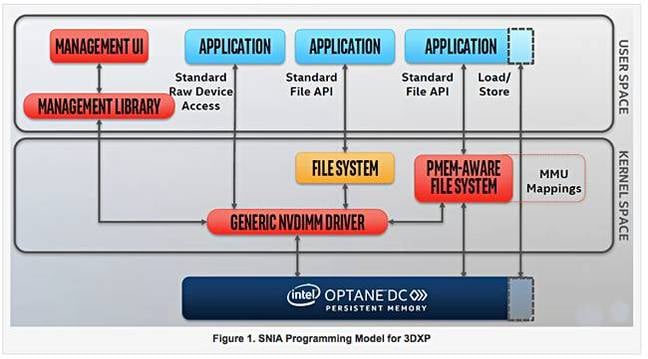 DAX has the lowest latency and highest throughput since the read/write path bypasses filesystem and NVDIMM driver software entirely. The application code is written as though it is accessing normal dynamic RAM when in fact it's hitting mapped-in persistent memory.

An open-source Persistent Memory Developer Kit (PMDK) allows programs to go down the DAX route. It's a set of nine software libraries that includes allocators, a transactional object store, a persistent memory log file, and other functions.

Kanter said PMDK is production quality for Linux, though some APIs are experimental, as well as for Windows, meaning it could be included in future versions of Microsoft's OS.

"The NT file system is persistent memory aware, so that developers can reap the benefits using standard file APIs," he explained. "HyperV also works with persistent memory, but is not quite as mature given the extra complexity, the 2017 release supports DAX for guest VMs.

He mentioned Aerospike, Oracle Exadata (with RDMA), and SQL Server 2016 are capable of using and benefitting from Optane DIMMs.

So we have the Optane DIMM hardware base on the way, and the software interface area looks pretty much sorted. But there are unanswered questions about Optane DIMM characteristics that could hinder its adoption.

Regarding security and serviceability, Kanter asked: "If a persistent DIMM fails or is moved to a different system, how will the contents be accessed? Similarly, what if the processor is removed (eg, due to a failure)? Any in-memory database customer should demand a sensible security scheme that enables recovery and serviceability."

The virtualization issue is about over-provisioning: "In modern systems, memory is virtualized by the OS and hypervisor, while storage is typically not virtualized. Persistent memory and 3DXP DIMMs fall in between memory and storage, and are not virtualised by current hypervisors or OSes. That presents a challenge for cloud vendors and customers, many of which are accustomed to over-provisioning physical hardware.

"We believe that some hypervisors will choose to virtualize persistent memory, but it is a question of when products will be released (or in the case of Xen/KVM, code released and put into production)."

These foggy areas should clear when Intel starts shipping Optane DIMMs, expected in the fourth quarter.

But overall Kanter reckoned Optane's DIMM future is bright: "Intel has released enough details about 3DXP DIMMs to tantalise and substantiate claims about 4X better density than DRAM, while demonstrating the performance advantage over NAND flash.

"Multiple server and client OSes and hypervisors already support persistent memory and leading developers are excited about the technology. The greatest excitement is from the database world, where the persistence and large capacity is invaluable. Beyond databases, the PMDK is ready for use, and will enable popular languages like Java to benefit from 3DXP DIMMs. Products will be out later this year, and we are quite excited to test out 3DXP DIMMs when they arrive." ®