As the world and their dogs' data centres continue to accelerate their take-up of SSDs, WD/HGST has fired a dual-port SAS SSD at them.

This 2.5-inch form factor SSD is a follow-on from last year's HGST Ultrastar SS300 and has been dubbed the DC SS530 (DC means it's a data centre-class drive).

WD has let its SanDisk-fuelled SSD market share slip back of late.

The capacity level varies with the endurance rating, and there are three of these – 1, 3 and 10 drive writes per day.

We see a clear example here of the effects of over-provisioning to extend endurance.

The sequential read/write performance is irritatingly provided in MiB/sec and not the more usual MB/sec. We've up-converted to GiB/sec and GB/sec:

The SS300 had up to 2.1GB/sec for sequential reading and 1.25GB/sec when writing – again there has been a big jump in write speed. 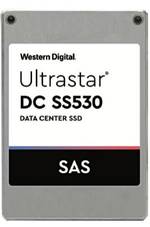 On the security side options are Secure Erase (SE), Instant-Secure Erase (ISE) and Self-Encrypting Drive (TCG SED). Models with TCG SED plus FIPS 140-2 validation are expected to be available in the fourth quarter.

Samples of the DC SS530 are shipping to OEMs now. Check out a datasheet here (PDF).

With WD having 96-layer 3D NAND technology, we might expect the next generation of this drive to head towards a 30TB capacity level. ®