Boffins: Mixed-signal silicon can SCREAM your secrets to all

Side-channel radio attacks just got a whole lot worse: a group of researchers from Eurecom's Software and Systems Security Group has extracted crypto keys from the noise generated by ordinary communications chips.

Unlike more esoteric side-channels, which often need physical access to a target machine or some kind of malware implant, this leak comes from radio devices working as intended by the maker. If an SoC packs analogue and digital operations on the same die, the CPU's operations inevitably leak to the radio transmitter, and can be traced from a distance.

As Tom Hayes of Eurecom wrote to El Reg in an email: “This type of leak is carried by the device's intended radio signal, and thus broadcast over a potentially longer distance” [than previous side-channel attacks].

“In our work we have demonstrated over-the-air extraction of AES keys from a consumer-grade bluetooth device over a distance of 10 meters”, Hayes continued.

The paper describing their work, “Screaming Channels: When Electromagnetic Side Channels Meet Radio Transceivers”, explains that the physical mechanism involved is very simple. “Leakage from digital logic is inadvertently mixed with the radio carrier, which is amplified and then transmitted by the antenna”, because “mixed-signal chips include both digital circuits and analog circuits on the same silicon die in close physical proximity,” the paper says.

That crosstalk between CPU and radio allowed the group to recover the AES-128 key from tinyAES from 10 metres away, and - using a correlation attack - they claimed to grab the AES-128 key in mbedTLS at a distance of one meter. Ouch.

To demonstrate that this isn't vendor-specific (for example, the result of bad design), the researchers tested the nRF52832, a Bluetooth low-energy chip from Nordic Semiconductor; and a Qualcomm Atheros AR9271, a Wi-Fi USB dongle.

As the spectrograph below shows, the ten rounds of an AES-128 negotiation are easy to identify in the “noise” coming from the Bluetooth LE chip: 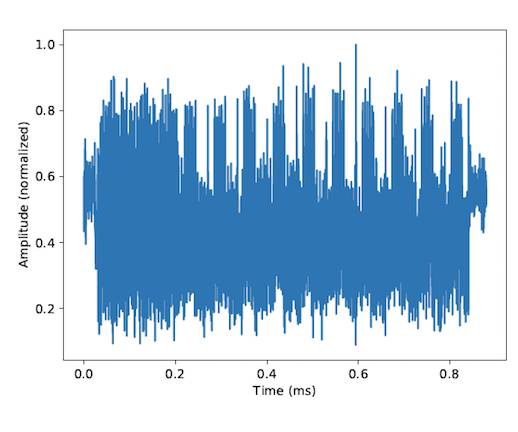 Because the digital noise is picked up and amplified by the radio circuits, it can travel a useful distance. The researchers achieved key recovery over 10 metres in an anechoic chamber, but they note that with more development, others could improve on their results.

With a trace captured and cleaned up, the researchers wrote, pre-existing key-recovery tools like https://newae.com/tools/chipwhisperer/ ChipWhisperer recovered the AES encryption keys with only small modifications.

The group has published its paper here, and its code is available at GitHub.

The paper will be presented at BlackHat in August, and at the ACM's Conference on Computer and Communications Security in October.