Dear alt-right morons and other miscreants: Disrupt DEF CON, and the goons will 'ave you 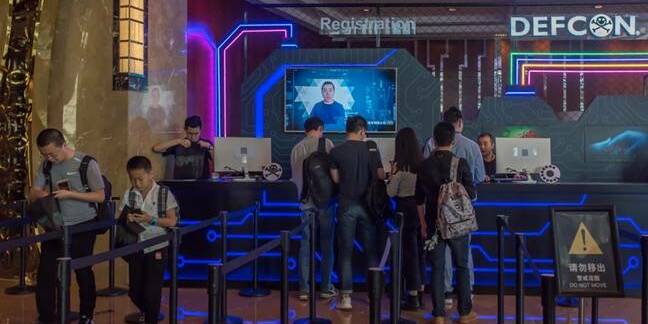 DEF CON The organizers of the DEF CON hacking conference, due to be held in Las Vegas, USA, next week, have put those who intend to spoil the event on warning: such tactics will not be tolerated.

At last month's Hackers on Planet Earth (HOPE) event in New York City, several sessions were wrecked by white nationalist attendees spouting conspiracy theory crap, one of whom tried to rush the stage. One man, wearing a "Make America Great Again" hat derailed a question-and-answer session, had his cap stolen, and called the police. Both the thief, and later the troll, were expelled from the confab.

The trouble was, the MAGA miscreants had mostly gamed and exploited the HOPE Code of Conduct, staying just inside the anti-harassment rules yet infuriating and intimidating audiences – think loud-mouth Westboro Baptist Church scumbags turning up outside your place of work. They even spun the code of conduct around on those complaining about them, declaring that they were being fat-shamed and thus they were the ones being harassed. Professional trolls, in other words.

Mozilla staffer Jairus Khan described the kerfuffles, here. Essentially, the menacers should have been dealt with immediately rather than allowed to block aisles, troll sessions, and provoke violence. The ruckus was enough for a range of groups, including the Tor Project and the Courage Foundation, to furiously slam the HOPE organizers for failing to boot out fascists and white supremacists.

The HOPE meltdown, and similar problems at the Chaos Computer Club conference last December, suggest that there is an organized attempt to disrupt hacking events by members of the alt-reichright. But when it comes to DEF CON, founder Jeff Moss made it clear he wasn't having any such nonsense at his party.

"When I designed the updated DEF CON Code of Conduct in 2015, I had a few goals in mind," he blogged late last month. "Make it simple to understand, express in broad strokes what kind of behavior is not acceptable, and don't be too specific.

"I wanted it to act as a template for other conferences, if they chose to do so. It was legally reviewed by our outside law firm and a specialist. In 2018, it's looking like it may get seriously crash tested."

The upshot is: the DEF CON Code of Conduct is a broad guideline, rather than a set of laws that other conferences have tried to apply fairly to all sides, even if one side is being deliberately disruptive, and run into problems.

Simply put: if you're an asshole, you'll get thrown out. Moss said he will "err on the side of removing people, rather than allow them to spoil the conference for those who just want to contribute in a positive way."

Security at DEF CON is handled by a group of red-t-shirt-wearing volunteers known as the goons. They make sure no one gets out of line, break up potential trouble with tact and diplomacy, and aren't above physically ejecting troublemakers.

One of the unwritten rules of DEF CON is that you never, ever, cross the goons. If anyone tries anything next week they are likely to be kicked into the fetid hell of the August Las Vegas sunshine with a boot mark on their backsides. ®

Leaving Las Vegas... for good? IT industry conference circuit won't look the same on other side of COVID-19 pandemic

Las Vegas locks down ahead of DEF CON hacking conference

Security world to hit Las Vegas for a week of hacking, cracking, fun

What happens in Vegas ... will probably go through the huge bit barn Google is building in Nevada

Excuse us, we mean 'Jasmine Development'

What do a meth, coke, molly, heroin stash and Vegas allegedly have in common? Broadcom cofounder Henry Nicolas

Hard-partying tech baron (no, not that one) cuffed