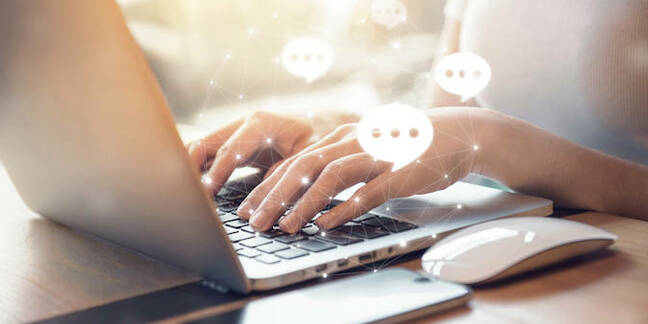 Not to be outdone, MessageBird, a competing cloud comms biz based in Amsterdam, has quietly rolled out a beta version of its own no-code service, Flow Builder.

The idea is to provide a way for developers to wire up cloud comms capabilities a bit more easily and for the less technically inclined to be able to try their hands at laying message plumbing.

"Developer resources are becoming so scarce within companies," said Robert Vis, MessageBird CEO, in an interview with The Register. "What no-and low-code solutions do is speed up the ability to deploy certain functionality within your stack."

Low-code and no-code tools have been touted by the likes of Microsoft and Salesforce in recent years as an answer to the scarcity of development talent in corporate business groups, and as an easy way to connect data sources during the automation of business processes.

Salesforce claims 51 per cent of IT leaders in 2015 expressed interest in low-code development and predicts that figure will reach 81 per cent by 2019. Citizen development, the cloud CRM biz insists, is the future.

That may be overstating things. Low and no-code tools won't turn the technically disinclined into DevOps darlings capable of standing up apps, servers, and code pipelines within the parameters of corporate policies. But they can expand the pool of people participating in dev-oriented tasks and save some time for developers who'd rather focus on more challenging tasks.

At the very least, menu-based app making has the potential to differentiate Twilio and MessageBird from other cloud comms companies like Vonage's Nexmo and Bandwidth.

The cloud communications services market that turns out to be rather active, thanks to the affinity consumers have for mobile devices and chat apps. Witness how both Twilio and MessageBird have recently announced integrations with the WhatsApp Business API – companies have to reach customers where they are, which often involves integrating with chat apps and telecom pipes.

The perils of pricing

Vis explained that while WhatsApp is not that big in the US, it's huge in Latin America and Europe because of the way mobile carriers there price text messaging.

Thus for companies operating in Europe and Latin America, WhatsApp represents a desirable communications channel, at least until the trends shift.

It can be used to build an interactive voice response system, a chatbot, SMS surveys, a Slack integration or the like.

MessageBird FlowBuilder promises similar results, with less code still. Want to send POST requests upon receipt of an SMS message? Want to implement call forwarding to a pre-programmed number? Looking to receive your server logs via SMS? There's a template for that.

"When we talk to enterprises, they want to deploy all these types of innovations and they can't get technical resources to do it," said Vis. "Our points of contact are not always developers, but they're dependent on developers to empower them with the solutions to get more customers on board or provide security. "

While Twilio has a higher profile in the US and perhaps better name recognition among developers, MessageBird, Vis insists, has an advantage that arises from its closeness to telecom infrastructure.

More so that the competition, he says, MessageBird connects directly to telecom providers.

"We talk to carriers as a carrier [over an SS7 network]," he explained. "We have our own global titles, our own mobile network codes. We are a carrier in every way except we don't have spectrum and we don't have telephone poles. We could be a super MNVO, but we use it for enterprise message and enterprise voice calls."

He concedes that Twilio may have more features exposed via API, but he believes it's necessary to build the infrastructure first to support functionality. Flow Builder, he said, is only in its first iteration and over time it will grow to include a more expansive set of APIs.

"If you don't own the infrastructure, what you're really doing is just simplifying very basic stuff," said Vis, noting that MessageBird has over 250 carrier connections globally and its competitors don't have even a tenth of that.

Vis contends focusing on infrastructure has given MessageBird an edge in markets like Europe and Asia where the operational requirements are more complicated than the US.

Nonetheless, Vis thinks there's room other players in the market.

"There will be multiple really big winners in this space," he said. "It's not a winner-takes-all market." ®