Sir Clive Sinclair's company has accused flailing ZX Spectrum reboot firm Retro Computers Ltd of trading while insolvent. Meanwhile, the firm has delivered some consoles – and been stripped of the brand rights to its flagship product.

Last week some customers of Retro Computers Ltd reported on social media that they had received samples of the infamous ZX Spectrum Vega+ console, the firm's flagship product.

Initial reviews were not positive, with many commenting on the lack of packaging and absence of items such as an instruction manual or a charging cable, as well as the need for users to manually map keys by themselves before being able to play games.

Although the company claimed it was posting out 400 consoles, one irritated customer spun up a probability distribution based on an analysis of serial numbers seen in social media pictures of the device that estimates a figure that is closer to 50.

The ZX Spectrum Vega+ scandal has become synonymous in the public eye with the pitfalls of crowdfunding. RCL's raising of £513,000 from more than 4,000 members of the public and subsequent failure to deliver the promised product for two years threw into stark relief the fact that crowdfunding platforms such as Indiegogo are wide open for abuse.

Though some lucky customers secured county court judgments against RCL to get their money back, the vast majority have been left out of pocket while RCL's management pumped out unkept promises of production and delivery.

In light of last week's developments, The Register is concerned that the first batch of consoles may be the last of the Vega+ ever to see the light of day.

No more Sinclair for you

The BBC reported that RCL has been stripped of its right to use the ZX Spectrum brand by Sky, which owns the trademark, having bought out Amstrad which in turn acquired the brand from Sir Clive Sinclair himself. Sky also owns the rights to a number of games that were supposed to be bundled with the console, which cannot now lawfully be done.

"In a statement provided to the BBC, we confirmed our decision – made in February – to terminate the licence as of 8 May 2018," the company told the Beeb. "To allow as many fans as possible to receive the console, we provided an additional 90 days grace period, which runs until 7 August 2018. This decision has also been communicated directly to David Levy of RCL."

Indiegogo to ailing ZX Spectrum reboot firm: End of May... or we call the debt collector

Levy, RCL's chairman, had tried to suggest to the BBC that Sky withdrawing the licence was "completely untrue" – ironically.

The Register has spoken to irate RCL customers who say they have reported the company to the Insolvency Service. The service has the power to investigate alleged irregularities within registered UK businesses, can apply to have companies wound up and can have individuals disqualified from being company directors. 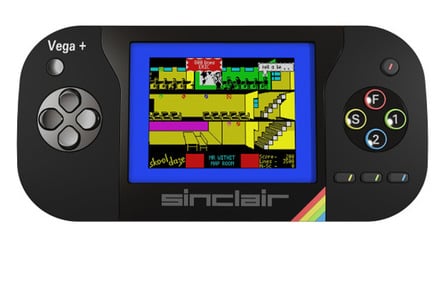 The original concept image for the Vega+

The Register has seen proof that the company bank account was all but empty in early 2017, while around 530 customers have requested refunds totalling £60,135 at the time of writing.

The Insolvency Service's involvement could be a double-edged sword. On the one hand, forcibly winding up RCL and holding its management to personal account would satisfy a great number of people. On the other, such moves would also hammer a stake into the corpse of the Vega+.

Last week also saw a crunch shareholder vote to dismiss RCL's current board, consisting of Levy, managing director Suzanne Martin and CTO Janko Mrsic-Flogel. They would have been replaced by someone appointed by SRL and the other shareholders: former MD Paul Andrews and former CTO Chris Smith, who designed the firmware for the Vega+ before the directors split in April 2016.

The Register understands that the intention was to examine RCL's management accounts and figure out if production of the Vega+ was possible from whatever resources were left in the firm's control.

At the twice-delayed shareholders' meeting, SRL abstained from voting on the motion to dismiss the directors. With Andrews, Smith and Levy each owning 25 per cent of RCL, and a 75 per cent threshold being needed to sack the directors, the motion failed.

Although SRL failed to take any action, a statement from SRL seen by The Register openly questions whether RCL is trading while insolvent.

It should be noted for the record that SRL have serious concerns regarding the solvency of the company and the ability to continue to trade and fulfil all of its obligations. The directors should consider the position and seek the appropriate advice as there is a real concern that the company is trading whilst insolvent.

Trading while insolvent is defined as a company being unable to pay its debts as they fall due and its assets being of less value than the total of its liabilities (debts). In plain English, if the cash in RCL's bank account plus whatever can be earned from flogging off company property is less than the total of its debts, the firm is insolvent.

The Register has asked RCL to comment on this allegation from SRL. We have also asked an SRL director why, if the company truly believes RCL may be trading while insolvent – which is against the law – it abstained from voting against the people who ostensibly got it into that position.

In summary: a handful of RCL customers have received a device that looks something like the originally advertised Vega+. It appears to have been completely redesigned in a great hurry and pushed out of the door to coincide with the shareholders' meeting, presumably to deter SRL from voting to sack the directors – a strategy that paid off.

However, for the other 4,250 customers awaiting consoles, they may well be left out of pocket. As RCL can no longer lawfully use the Sinclair branding or more than half of the original 1,000 games that were supposed to be bundled with the Vega+, hope of further deliveries has all but disappeared.

What happens next is in the hands of SRL and the Insolvency Service. ®

Crowdfunding platform Indiegogo, which RCL used to raise its initial funding from the public, appears to have changed its systems so money pledged by "backers" (as it calls customers) is recorded as a "pledge" and not an "order".

This appears to be a direct result of the January 2018 court case against RCL where the use of the word "order" was what convinced the judge to sweep aside Indiegogo's terms and conditions and rule that a contract of sale had been created.