Devon County Council techies: WE KNOW IT WASN'T YOU!

Head of education letter littered with mistakes, blames 'IT printers' for bad spelling

Devon County Council has pointed the finger of blame at a "new IT printing system" for a letter littered with spelling mistakes that informed a father he was being fined for taking his son out of school in term time. 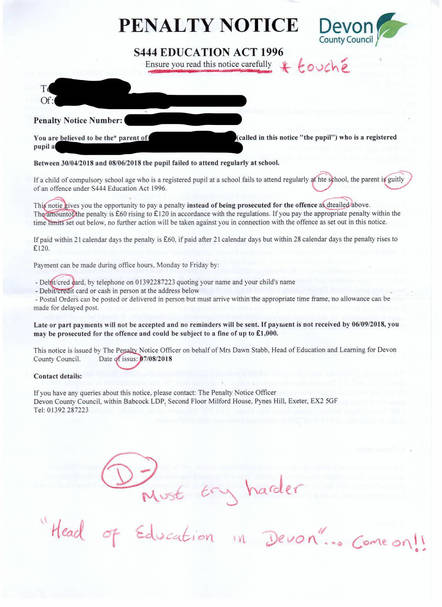 The letter Daniel Moore received (used with his kind permission). Click to enlarge

Daniel Moore from Exmouth received the note to let him know he owed £60 because he had holidayed on Majorca with the family in May and his lad had missed five days' worth of lessons.

Moore said he had "marked and graded" the letter as it contained multiple spelling mistakes, seven to be precise. Maybe someone from The Graun was moonlighting for the Council that week?

He recounted the story on Facebook, “I’m not going to pretend I’m a spelling guru or a typing expert. But I’m also not the head of education in Devon.

“This woman’s in charge of the future generation’s education, our children’s education and she’s rubber-stamping this tripe,” said Moore.

He said he would pay the fine, “no questions asked, but I shall also be sending her letter back marked and graded”. And perhaps he’d slip in a holiday pic or two, Moore added.

A Devon County Council spokesman told the Beeb: “We’ve been trialling a new IT printing system and a number of mistakes were unfortunately not picked up before this letter was dispatched.”

Quite how the poor old printer was at fault isn’t clear to us. Printers print what they are told to print and unless there is a canny new AI/ML printer that picks up the errors and changes them before it is printed (there isn’t) then El Reg is at a loss to explain the Council’s explanation.

“It is an embarrassing error and we have taken steps to ensure it won’t be repeated,” the spokesman added.

Well, IT often cops the blame for things. You know, the poor sods in the basement that only emerge when it is time to troubleshoot. The tech department at Devon County council will no doubt take this on the chin and keep quiet. ®

Security controls aren't there to just look pretty, you know

If only 3D desktop printers could 3D print sales! Units crash in Q1