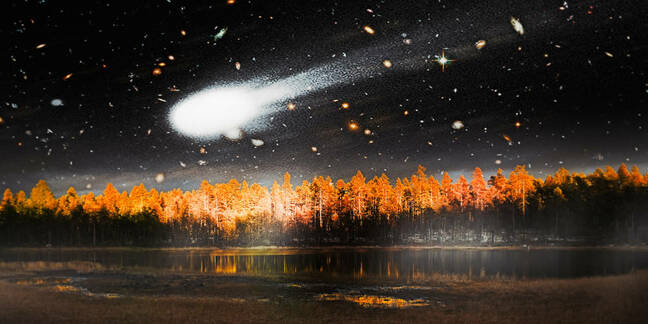 The oldest rock formations on Earth were born when meteorites pummelled into the ground over four billion years ago, according to a Nature Geoscience paper published on Monday.

A team of geologists have analysed samples of felsic rocks known for containing high concentrations of silica near the Acasta River near Great Bear Lake, the largest lake in Canada. The rocks are known as the Idiwhaa gneisses, meaning ancient in the Dogrib language spoken by the Tlicho people, an indigenous group in Northern Canada,

These rocks are believed to be around 4.02 billion years old, judging from uranium-lead dating of tiny zircon crystals lodged inside. The researchers modeled the formation process for the rocks by looking at their chemical composition and measuring the melting points for all the different minerals.

The Solar System's oldest minerals reveal the Sun's violent past

"Our modelling shows that the Acasta River rocks derived from the melting of pre-existing iron-rich basaltic rock, which formed the uppermost layers of crust on the primitive Earth," said Tim Johnson, co-author of the paper and a senior lecturer in applied geology at Curtin University, Australia.

The iron-rich basaltic rock are known as amphibolites and contain high amounts of iron and low levels of quartz. “It would have needed something special to produce the 900oC temperatures needed to generate these early felsic rocks at such low pressures, and that probably means a drastic event, most likely the intense heating caused by meteorite bombardment,” said Johnson.

The meteorite bombardment would have melted rocks within the continental crust stretching to about three kilometers down to make ancient felsic rocks like those found in Canada common. But the surface shifted and changed as Earth’s plates formed and split apart.

“We believe that these rocks may be the only surviving remnants of a barrage of extraterrestial impacts which characterized the first 600 million years of Earth History," Johnson added. ®

Azure support arrives in Spinnaker, Azure DevOps rocks up in the UK

This is local storage for local people

Q1 2019 beat guidance, but FY 19 forecasts were cut and investors bit back

Insane in the domain: Sea Turtle hackers pwn DNS orgs to dash web surfers on the rocks of phishing pages