Datrium shifts disasters up the Amazon: Adds DR in AWS for on-prem kit

Datrium has introduced disaster-recovery-as-a-service to its existing on-premises DVX system.

The new disaster recovery (DR) scheme backs up VMware server system data to Cloud DVX in AWS. If the on-premises DVX/VMware system fails, then a VMware Cloud on AWS is the failover DR site and CloudShift keeps that pre-seeded with data (from DVX in an AWS backup site) and ready to run.

The scheme uses a software-defined data centre in AWS with on-demand instance pricing. The firm claimed this was cheaper than standard two-site DR with synchronous replication.

VMware runs on this Datrium DVX, with Datrium software running in vSphere as a vSphere Installation Bundle for data services, and there’s a scalable disk shelf for data protection.

The second component is Cloud DVX, a cloud-native instance of DVX software in the AWS cloud, running on EC2 and S3. On-premises DVX systems back up their changed data on a SaaS basis to this cloud, using replication and global deduplication.

CloudShift, meanwhile, which was introduced this week, provides DRaaS by failing over from a failed DVX site to a VMware Cloud in AWS. It orchestrates and instruments DRaaS for VMware Cloud on AWS.

Datrium said this DVX is server-powered storage, running on VMware servers with local flash, with capacity and backup offloaded to an external highly resilient data recipient (Cloud DVX and CloudShift). 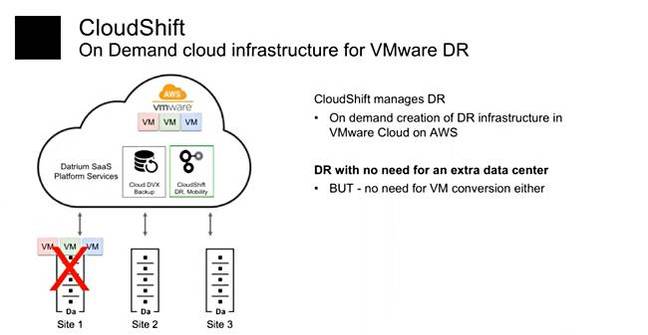 It appears that it can provide a low RPO (Recovery Point Objective) because the data sent to the cloud is changed at the local site which is globally deduped, minimising bandwidth needs and enabling Datrium software to keep backups and VMs up to date and ready to run when a failover is needed.

The RPO could be achieved in minutes, the firm claimed, by using DVX primary snaps of VM protection groups.

CloudShift provides a single console for resources and runbooks, and is virtual machine-centric so there are no abstractions such as LUNs to manage.

Datrium said that VMware Cloud on AWS is a software-defined data centre, with vSphere, VSAN, NSX and vCenter components.

Thus, if the DR site becomes operational, no VM-level conversions to AWS-format VMs (for example) would be needed. 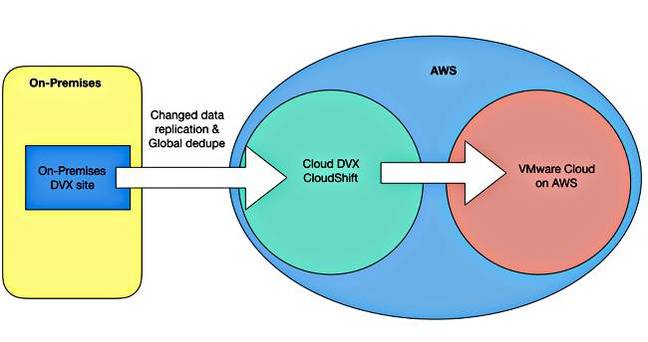 Datrium CloudShift will be available in the first half of 2019. There's a product brief here (PDF). ®

Move over, Alien vs. Predator: Signing into AWS with an Office 365 login is a real crossover