Unbelievable that more wasn't made of this non-story 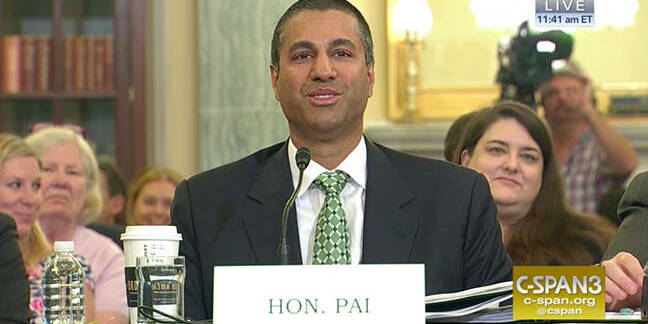 Net neutrality advocates were left furious on Thursday that there wasn't more fury directed at the chair of the Federal Communications Commission (FCC) at Congressional hearing despite, the fact he killed off net neutrality several months ago.

Johnson was referring to a tweet from furious freelance tech reporter Karl Bode. But Bode was too furious yelling about how Pai's "press shop actively maligned and misled reporters" (meaning himself) to notice the fury coming from Fight for the Future, which was furiously typing up its latest blog post in which it screamed: "Today removed any doubt that Ajit Pai will be remembered as one of the worst FCC Chairs in US history, and he should resign immediately."

Even the more reasoned reviews of the hearing were focused – and disappointed – by the fact that congressmen and federal regulator commissioners weren't as equally angry as the people watching them.

Pai and his people had personally lied to Congress and – worse! – to reporters when they insisted that the collapse of the FCC's comment systems were due to a cyberattack. It was time for him to face the music.

Except, of course, a report by the FCC's independent inspector general revealed that actually it was a misjudgment by its CIO and Pai's office had been skeptical of his cyberattack explanation all along.

Yes but HOW LONG HAD HE KNOWN?! screamed the net neutrality advocates. Several months was the answer. HE'D KEPT US IN THE DARK FOR MONTHS!!! the screams of indignation rang out. Why? Why?? WHY???!!

Senator Brian Schatz asked that question and Pai answered exactly how he had already indicated he would: because his inspector general had asked him not to say anything until the report was finalized, in part because there was a risk there would be a criminal prosecution over false statements.

"Once we knew what the conclusions were it was very hard to stay quiet," Pai said. "We wanted the story to get out." He made this judgment "even though I knew I'd be falsely attacked," he noted.

And, of course, Pai has been falsely attacked. Which, ironically, makes us suspicious that part of the calculus the FCC chair made in not speaking out was that even though he was cleared of any blame, he could rely on the righteous indignation of others to attack him anyway – and so paint himself as a victim of left-wing madness.

Such is the cost of mindless partisanship and demonization.

There was more mindless and worthless criticism and counter-criticism over the topic of – aaaarrrgggghh – net neutrality.

Pai rather smugly chided everyone for "claiming" that the internet would fall apart if the net neutrality rules were reversed. Except of course literally no one – not even the loons calling on Pai to be fired for doing his job professionally – actually said any such thing.

"It has now been 67 days since the repeal of the previous administration's utility-style Internet regulations took effect," Pai said in his openings remarks. "The internet is still open and free."

It was retweeted by Pai's own communications staff. Pai's chief of staff has literally been tweeting every day pointing out that another day has passed since the rules were scrapped.

Today's tweet: "Day 67 of the post-Title II era: The Internet is free and open, and it's Julie Newmar's 85th birthday. Best known for playing Catwoman on 1960s Batman TV series."

He does this every day – even on weekends – here's the one from this Sunday: "Day 63 of the post-Title II era: The Internet is free and open, and 11 years ago on this date, Tiger Woods won his 4th PGA Championship. Will he win his 5th today?"

What is wrong with these people?

Look after the kids

All of this rabid, chest-thumping tribal nonsense had the peculiar result of making Congress – yes, Congress – looks like the reasonable parent.

Senators pointed out that it was unlikely that ISPs would start implementing the worst fears of net neutrality advocates – blocking content, charging more for certain websites, and so on – because the entire process was under a dark cloud of lawsuits right now.

But, as FCC Commissioner Jessica Rosenworcel pointed out – there aren't any actual legal constraints from stopping them from doing so and so it was really only a matter of time. "When a company has the business incentives and the technical ability and the legal right to do so, it is going to happen," she noted with an unreasonable degree of reasoning.

Aside from the fact that Congressmen and women appeared to have completely bought into the nonsense that there is a "race to 5G" and that if everything isn’t done to make it as cheap as possible for multi-billion-dollar telcos to roll out the technology that somehow China is going to win, there were some actual reasonable oversight work done.

Congressman Jon Tester was perhaps our favorite this time around for his total honesty and clarity.

Tester is from Montana and pointed out that at his own home, he sometimes can't get a signal. This is despite the fact that the official coverage maps produced by the FCC from data provided from mobile operators shows his area as being completely covered.

"The maps stink," he said referring the widely panned coverage maps produced by the FCC. "You've got to target those maps."

To Pai's credit he at least acknowledged the main way that ISPs and telco fudge the system – by using census block and claiming that even if one person in such a block gets coverage it means the whole block is covered.

But Tester wasn't buying Pai phoney explanations over what the FCC is doing about it. Pai started to policy wonk himself to death talking about rules when Tester fired back: "It's going to take more than rule changes – it's going to take a push. The maps stink and we have to be more proactive… we have to kick someone in the ass."

The truth is that the current majority FCC Commissioners talk endlessly about how they are going to improve rural broadband and update America's broadband infrastructure and kill robocalls but all these efforts are built around putting more money into the pockets of the largest telcos, and every proposal that would really make a difference tends to require the FCC to push Big Cable off its pot of gold – and under Pai they refuse, for even a second, to consider such an approach.

The FCC in fact already has the authority to introduce precise measures that would force cable companies that are making billions in profits annually to invest in infrastructure that would bring fast internet to rural America.

But it won't do it. And cable companies won't invest in loss-making infrastructure, even as they milk their oligopoly in other parts of the country. This tension between public interest and profit is precisely why the FCC exists – but it won't push back, or put the pressure on.

What is Pai's big idea? To spend government money subsidizing cable companies to put in pipes. But even that process had been slanted to benefit the largest companies and squeeze out the small guys.

That is the story that the frothing-at-the-mouth activists and indignant tech reporters should be focused on, not the fact that someone who did something they don't like wasn't shouted at enough.

And Congress? Congress is like a lazy pitbull who really wants a juicy bone but can't be bothered to go find one. In that respect, today's FCC hearing was like watching the dullest dog-fight in history: bored animals nibbling on each other's legs when the crowd screams at them to tear at each other's throats.

It was not a very edifying spectacle. ®