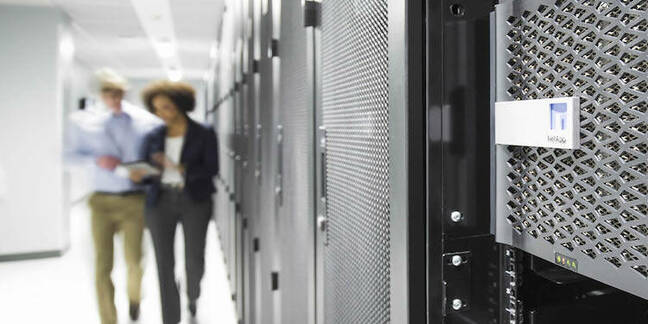 All flash arrays made up just 14 per cent of NetApp's installed base, up from 10 per cent last year, but the firm expects NAND price declines to push that number up higher.

Net App's flash array business was a big contributor to its $1.47bn sales haul for its Q1 ended 28 July, up 11 per cent on prior year quarter.

"[A]s the prices went up, we saw a mix shift towards hybrid disk/flash system," remarked big cheese George Kurian on an earnings call. "You’re starting to see the early reversal of that trend back in the all-flash arrays."

However, he reassured investors: "It’s not like people will spend less, they will just spend the project amount and buy more flash as opposed to disk to consume that budget."

Warming to the theme of the effect of lowering 3D NAND flash prices, he added: “As prices ameliorate for 3D NAND, which we are starting to see clearly, that performance [disk] drive, the 10-K drive segment will concede to the all-flash array segment.”

Product revenue was $875m, up 20 per cent annually; software maintenance came in at $229m (up 3 per cent y-o-y); and the firm pulled in $370m from hardware maintenance and other services. This was flat year on year.

Kurian responded to a question from an analyst on the call that product revenue was "still growing much ...faster than service revenue," adding ruefully: "product... [has] a lower gross margin than services, right?"

The firm also benefited from customers looking to the public cloud, saying: “Enterprises are signalling strong confidence in NetApp by making long-term investments to enable the NetApp Data Fabric across their entire enterprise.”

Asked by Rakers about this and NetApp’s HCI product progress, Kurian said on the call: “With regard to whether we will break out HCI or not, we’ll provide you that clarity when we do it.”.

He added: “At this point, HCI is a part of our product revenue. We have seen a broader number of competitive engagements and we are winning our share… We’ve had good competitive wins. … we have some really exciting product announcements at NetApp Insight, and you’ll see how we build NetApp HCI into our compelling Data Fabric story there.”

NetApp Insight will be held in Las Vegas, October 22-24, and it should also contain news about the object storage StorageGRID product.

Then Kurian moved on to the competing suppliers, as CEOs often like to:

I think, the legacy competitors are in a variety of states of challenge. I think, if you look at the large players like EMC or HP, they’re still trying to rationalize their lead flash portfolio, because none of their products is complete.

If you look at players like IBM and Hitachi and Fujitsu and Oracle, they basically conceded and are no longer in sort of new deployment considerations. They’re essentially defending the installed base and the startups are challenged.

They have essentially been fast on product innovation, and they don’t have the market reach to compete. So it will be, I see some sense of consolidation coming up in the marketplace and we will benefit from that, because we’re very well-positioned.

One Wall St type asked about NetApp’s view on composable infrastructure and HCI, to which Kurian replied: “Our solution has many of the elements of composable in it.”

All flashy beings, great and small, quiver before the chart

Just minding your own business, doing HCI. Suddenly you're inside ... a magic quadrant

The cause of all this misery? Storage vendors poach key analysts

HDS, HP leapfrog NetApp in the land of the MAGIC QUADRANT