Self-driving cars will be safe, we're testing them in a massive AI Sim

It's turtles all the way down

The British government this week unveiled plans for an ambitious AI simulator to be used to test self-driving cars. It's part of a stated mission to make the UK the world's leading destination for testing autonomous vehicles.

The simulator, called OmniCAV, recreates a virtual version of 32km of Oxfordshire roads.

"It's a synthetic digital model of the real world," Mark Stileman, bid manager at one of the partners involved, Ordnance Survey, told us. The OS already knows where a lot things are, and the sim adds "feature classification and retrieval" of road furnitures like gantries and white lines, and crucially, road intersections. "We're seeing what machine learning techniques we can throw at that".

OmniCAV's parentage is complex. Every bit of Whitehall it seems wants a piece of the robocar revolution. The official HM Govt acronym is CAV: "connected and automous vehicles". The Department of Transport begat the CCAV, the Centre For Connected and Autonomous Vehicles, in partnership with Innovate UK. This in turn begat Meridian, which is part research, part commercial.

"Meridian will cement the UK’s status as the go-to destination for development of CAV and new vehicle technologies," UK.gov claimed last year. So there's something tangible with which to measure success: how many contracts it wins. Minister Claire Perry said she believed the global CAV testing market will be worth £907bn by 2035, creating 27,000 jobs.

The government would be happy with 5 per cent of the CAV testing business. And where nicer to do it than down virtual Oxfordshire roads?

But the problem isn't convincing the AV makers that the UK has the best simulators - it's convincing the public that an "AI-powered car" tested in an "AI simulator" itself is desirable.

Stileman told us that simulator needs to include real world dangers such as kids milling around an ice-cream van and plastic bags flying across the field of view, too. But there may be others.

As Christian Wolmar explained in a recent rage, city planners smitten by AVs are redesigning cities to wall off pedestrians - just so the AVs don't crash (cf the "Holborn Problem").

"Safe autonomous cars will require modest infrastructure changes, designs that make them easily recognized and predictable, and that pedestrians and human drivers understand how computer driven cars behave," Google AI evangelist Andrew Ng wrote in 2016. So for the AV to be safe, it won't be a walkable city any longer.

Which raises the question: which reality will the simulator simulate – the real world, or Ng's? 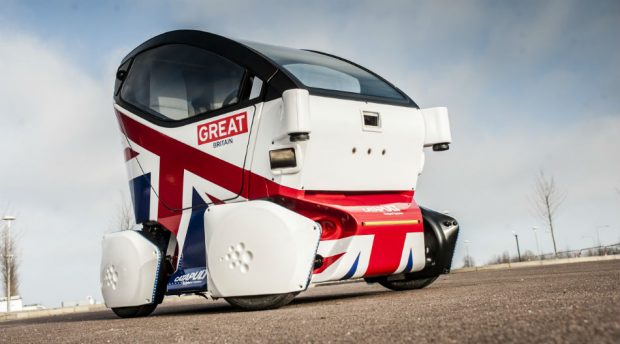 Your taxes at work: a Lutz Pathfinder Pod

The more people learn about AVs - to paraphrase Alan Partridge on Hitler - the more they dislike AVs. A poll published this week found that 49 per cent of Americans would never buy a Level-5 AV, up from 30 per cent two years ago. The greatest preference is for more human control - L2 is now the most popular option from the range presented, and that's less "autonomous" than the L4 class of vehicle that most people plumped for in 2016.

Enthusiasm for AVs is not correlated to awareness of well publicised accidents, the pollsters found, suggesting that the concept itself is going to be a harder sell than the techno utopians thought.

Stileman argues that even if the AV dream remains a distant fantasy, there's still a benefit for public safety from the "connected" part of the CAV proposition.

"Automation is a longer-term bet. Vehicles being able to talk to each other, especially as they negotiate an intersection, could be very useful when it comes to safety." ®