They plunged off the Peak... They perished on the Plateau... They tripped in the Trough...

There's been a tragedy on the fields of emerging technology and nobody seems to have noticed. Once-promising trends that were toiling for recognition a year ago have simply vanished.

Where have they gone? Let us explain.

Every year Gartner publishes its annual "Emerging Technologies Hype Cycle". For two decades this has become a big draw for the company, and it perpetuates the idea that emerging technology trends follow a repeatable path.

For a new technology to succeed, according to the mythological Cycle, it must first climb the "Peak of Inflated Expectations" before falling into the Slough of Despond, or as Gartner calls it, the "Trough of Disillusionment". There, after shaking off the Mud of Mockery or the Dust of Derision that is presumably found in the Trough, it must pick itself up and begin to ascend once again, up along the gentler "Slope of Enlightenment" before arriving, triumphant, onto the sunny uplands of the "Plateau of Productivity". Only then can an Emerging Technology finally put down the backpack, open the Thermos flask, and tuck into a well-deserved packed lunch.

Some of these are quite significant. Last July, Machine Learning was two years away from the safety of the Plateau. But that's disappeared. Its cousin Deep Learning is hanging perilously on, like so many trends, exactly where Gartner put it last year.

Last year, Edge Computing could be found toiling up the Western slope of the Peak of Disillusionment – but that has fallen out of sight, too. So has Human Augmentation, Augmented Data Discovery, and Knowledge Graphs.

With some trends, it's harder to tell. Gartner replaces one term with another trendier one, so, for example, Autonomous Vehicles has disappeared – but Autonomous Driving Level 4 has taken its place. That's advancing nearer reality – but still "more than 10 years away". Conversational User Interfaces disappeared and Conversational AI Platform magically appears to take its place. Slightly lower down, though.

Digital Twin is one of a few risers. That's now reaching The Peak. Look out, Twins. IoT Platform is now in the danger zone: cresting the Peak into the Trough. 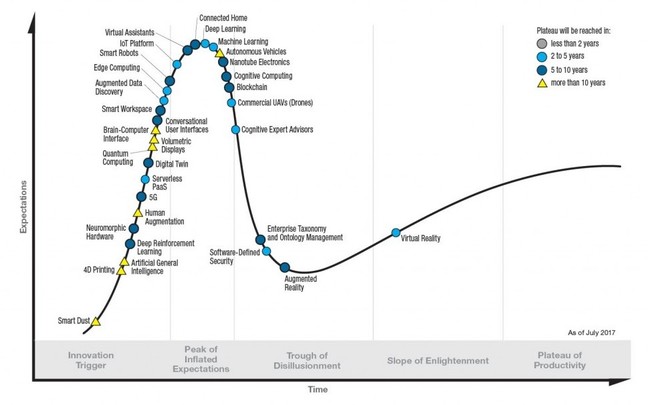 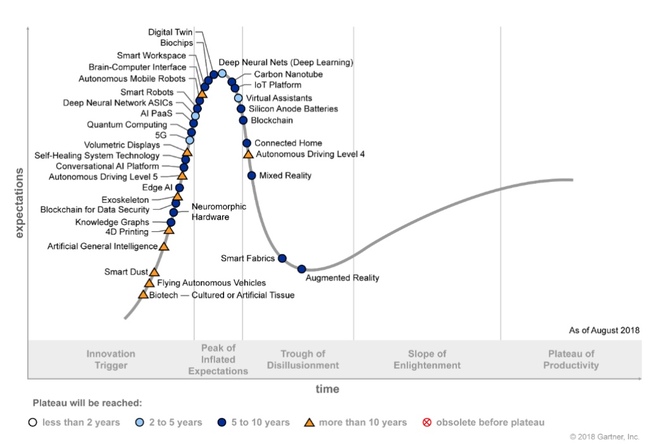 Unfortunately for CIOs, the Slope of Enlightenment is now very sparsely populated. Last year only VR could be found in that happy place. This year, the Plateau is entirely empty. Dust and tumbleweed blows across this blasted plain: there is no life here.

Crikey, we thought. How can Gartner account for this? Where did all those Emergent Trends go? Have they passed through the Plateau, or just passed on? We'll let you know when we have an answer.

For what it's worth, this year's strivers are: "Democratised AI" (yup, the maker community), Blockchain, DIY biohacking (which includes "grinder hacking"), Transparently Immersive Spaces ("Smart Dust" is not quite dead, we see, and the tantalising "4D printing") and "Ubiquitous Infrastructure", which includes 5G and deep neural ASICs.

The latter two, Gartner said ominously, "are expected to reach the plateau in the next two to five years". Or not.

The loss of the Drones is hitting the Reg Office hard today. How about you? ®

The Hype Cycle has been criticised for bearing only a tenuous relationship with reality. As VC Mike Mullany explained here, many just die. Others rapidly reach mass adoption without the hero's journey, like the DVD.

And another problem is obvious from the comparison between 2017 and 2018: emerging trends are unidirectional. They can apparently only move in one direction, or they have to stay where they are, or mysteriously vanish. They can't regress and then re-emerge, rather like an overweight man trying to get out of the deep end of a swimming pool. That would be one fix we humbly suggest Gartner could usefully implement. Or knock it on the head altogether.