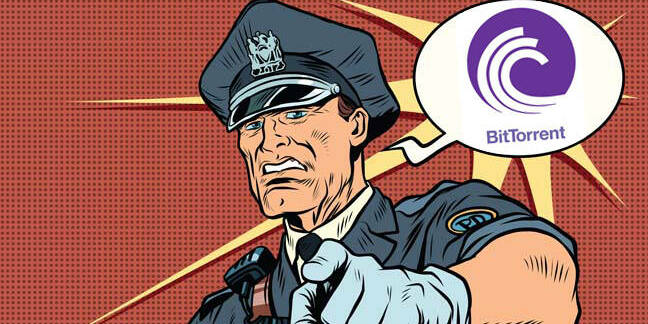 An ISP based in Texas has complained to a judge that the music industry to trying to turn internet providers into the "copyright police."

"This case is an attempt by the US recording industry to make Internet service providers its de facto copyright enforcement agents," reads the latest filing [PDF] in an ongoing court case involving ISP Grande Communications.

It goes on: "Having given up on actually pursuing direct infringers due to bad publicity, and having decided not to target the software and websites that make online file-sharing possible, the recording industry has shifted its focus to fashioning new forms of copyright liability that would require ISPs to act as the copyright police."

Grande Communications is a high-speed ISP that is the main provider for several university campuses in Texas. It was sued in April 2017 by 18 music companies including Universal, Capitol, Warner and Sony, who accuse it of allowing its users to "engage in more than one million infringements of copyrighted works over BitTorrent systems."

Despite having repeatedly complained to the company, the music industry argues [PDF] that Grande has failed to "take any meaningful action to discourage this continuing theft, let alone suspend or terminate subscribers who repeatedly commit copyright infringement through its network, as required by law."

Grande isn't having any of it however and argues that the industry's attempt to make it legally responsible for copyright infringement is "absurd." It counter-claims that it has been inundated with "unsubstantiated and unverifiable allegations of copyright infringement" complete with a demand that it terminate user accounts in response.

"To further this effort, the recording industry enlists a third party to bombard ISPs like Grande with hundreds of thousands of such allegations per year," the ISP argues, adding that it is "more than any ISP could ever reasonably investigate and attempt to verify, even if it had the practical ability to do so."

The end result, Grande argues, is that it is put "in an impossible position: either terminate subscribers based on unverified allegations of infringement, or face litigation for the secondary infringement of thousands of copyrighted works."

It argues however that the music industry has no case because "copyright law simply does not and cannot allow for secondary liability in these circumstances."

The music industry's argues that by failing to respond to infringement notices under the Digital Millennium Copyright Act (DMCA), Grande is contributing to copyright infringement and cannot benefit from the DMCA's "safe harbor" protections.

"To be eligible for the safe harbor, an ISP is required, among other things, to adopt and reasonably implement a policy that provides for the termination of subscribers and account holders that are repeat copyright infringers," it argues.

The music industry claims to be able to identify copyright infringers using BitTorrent thanks to a system developed by Rightscorp that "identifies actual infringements and the perpetrators of these infringements (by IP address, port number, time, and date)."

The system monitors BitTorrent and, according to the music industry, "has the capability to acquire entire files from the infringing host computers."

Grande throws cold water on those claims however, arguing that there is no evidence that "a Grande subscriber ever reproduced or distributed a copyrighted work on Grande’s network." It argues that the companies have failed to carry out "the legally-required comparison of any copyrighted song to any infringed work."

It also slams Rightscorp's claims, arguing that its system "is only capable of detecting when a file is made accessible - the system cannot detect when, or even whether, a file has ever actually been copied."

Grande says Rightscorp' system simply "obtains a list of song titles and artist names from its clients" and then uses this "limited information to scour the Internet for alleged 'infringements' so that it can generate notices and possibly elicit monetary settlements from individual Internet subscribers."

It goes on: "Amazingly, Rightscorp conducts these notification and settlement activities without ever obtaining (1) a true copy of the song that could be compared to the “infringing” copy, (2) registration information that establishes the song is registered with the Copyright Office, or (3) documentation proving that the client is the true owner of the registered work."

It's not finished yet another. Grande goes on: "Because Rightscorp’s system cannot detect actual instances of a file being uploaded or downloaded by anyone, the notices it sends do not evidence any instance of actual infringement of a copyrighted work. Even the date and time on the notice are misleading - they merely reflect the moment at which Rightscorp's system performed its scan and not any recorded instance of a work being copied."

As a result, Grande argues, "if Rightscorp’s system were to be run twice as often, Rightscorp would generate twice as many 'infringement' notices, without any related change in the conduct of Grande’s subscribers. These notices would then be used by Rightscorp to attempt to collect twice as many settlements from affected subscribers."

In response to the claim that Rightscorp's system is flawed and built around making money from fake notices, the music industry argues Grande benefits financially from selling faster speed internet connections to copyright infringers. "The greater the bandwidth its subscribers require for pirating content, the more money Grande receives."

In summary: go away

In essence, Grande is saying that the music industry can't prove that anyone is downloading copyrighted tracks, or that the files on the system aren’t legitimate copies, so it can take a hike.

And the music industry says it can see hundreds of thousands of examples of its music being shared on file-sharing networks and so argues that the only rational explanation is vast copyright infringement that Grande is refusing to do anything about.

Normally ISPs send warnings to any user that it is informed is infringing copyright telling them to cut it out of face being cut off. Sometimes ISPs simply block or throttle such file-sharing services. But Grande is unusual in that it supplies internet access to university campuses situated on private land. As such, it's much harder for the music industry to simply set up an account with Grande and demonstrate proof of copyright infringement.

Of course the likelihood that thousands of university students are using BitTorrent to share files that everyone has a legitimate right to own is virtually zero. But if the judge decides there is no actual evidence of infringement, the music industry would be in a bind and may have to get a student on campus to find copyrighted material and agree to act as a witness.

If the judge does appear to side with Grande on the evidentiary issue in this case, we strongly suspect that the music industry will try to do just that and recruit a student witness. Whether it's successful or not would be another matter entirely. ®