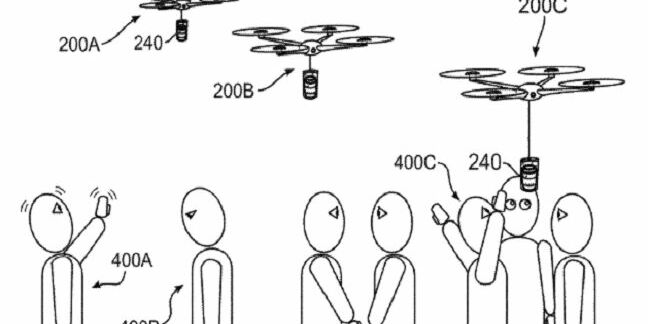 IBM has filed a patent for mood-sensing coffee delivery drones, because what the world really needs is piping hot liquids flying around over everyone's noggins.

Big Blue's plans for aerial hot beverage deliveries not only include deliveries of pre-ordered brews but also taxi-style flagging down of aerial drinks.

The US Patent Office filing revealed that what IBM thinks might happen in the future is a delivery system that flies a coffee-laden drone to "an area including a plurality of people; scanning the people, using one or more sensors connected to the UAV [drone], the one or more sensors connected to an electronic processing circuit which identifies an individual among the people that may have a predetermined cognitive state".

Put another way, if you're feeling glum, IBM wants a circling coffee drone to sense this and then fly hot drinks at you.

The details of the filing have suggested IBM's drone sensors could be collecting and analysing data on everything from the time of day to facial expressions, your gestures and even the dilation of your pupils. It hopes to merge this with your work calendar as well as "the time an individual woke up in the morning".

You can almost hear the data protection people crying from here.

For the practical-minded victim potential recipient wondering how the coffee won't get poured over everyone between the filling point and delivery, IBM's patent includes a coffee cup gimbal arrangement – and an inbuilt heater. One of the ways the firm suggested delivering the coffee is to have a string attached to the cup, with the drone cutting the string once it senses the cup being pulled away. What could possibly go wrong?

Rather amusingly, Big Blue went into a bit of cod psychology in the patent filing, with the author diving head-first into social proof theory (if I see someone of high status drinking coffee, I'll want coffee too) and reaching the conclusion that "a coffee drone in this setting might also take advantage of social psychological effects by first providing a coffee to a person who is popular [or] famous".

You hear that, Ginni? Staff might not be able to approach you in person but your drones will be coming for you!

The idea of loitering drones ready to deliver wanted items brings to mind the creepy servo-skulls of the Warhammer 40K universe. ®