Just how rigged is America's broadband world? A deep dive into one US city reveals all 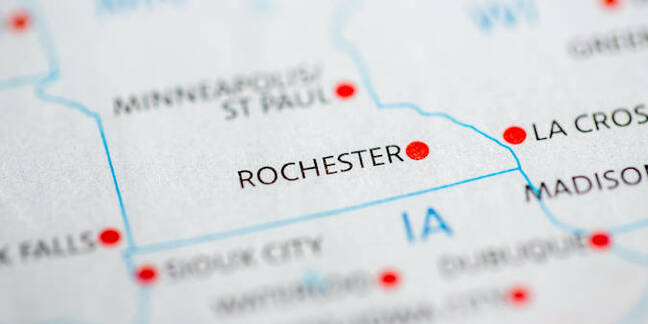 Analysis A deep dive into internet access availability in one US city has revealed – again – that competition for broadband is dreadful and far below what official figures claim.

In a report [PDF] put together by the Institute for Local Self-Reliance, investigators looked at real-world internet offerings within a 30-mile radius of Rochester in Minnesota.

Rochester provides a useful contrast in that it has a heavily built-up center with a spread-out urban space surrounding it. It also claims to have no less than 19 companies that provide residents with broadband internet access – something that its local council has boasted about – and exists in a state whose leaders have set some ambitious broadband goals: 25Mbps for everyone by 2022; and 100Mbps by 2026.

However, as the investigation revealed this month, competition is something available only to a minority of people who live in the most dense areas, and access to fast internet access above federal minimums remains a virtual monopoly.

And the official figures provided to the Federal Communications Commission (FCC) by ISPs – which are often the sole source of information about internet access, particularly when it comes to formal decisions made by local or federal government – support the picture of Rochester as a haven of broadband competition.

But, as numerous other surveys have pointed out previously, the data is deeply flawed thanks to its use of census blocks and the clear advantages that exist if ISPs exaggerate the extent of their coverage and the speed of their offerings.

If a broadband provider can say that a single person within a census block is able to receive internet access from them – regardless of whether they do or not – then that provider can claim in its official stats that the entire block is covered. That has led to the situation where numerous ISPs claim 100 per cent coverage of Rochester and its 30-mile perimeter. The reality is quite different in the ground.

For one, the ISLR decided it had to exclude one company – wireless provider LTD Broadband – from its survey entirely, despite the company claiming 100 per cent coverage because it "had significantly overstated its coverage."

Including both wired and wireless connections, the report's authors found that of the 215,000 people living in the area under review, no less than 4,000 of them have no access at all to broadband.

When you look at only wired providers – which the federal government has repeatedly concluded is preferable to slower wireless networks – the situation gets worse. There are only 4,000 people – less than two per cent – who have a choice between three providers.

Most residents have little or no competition: 42,000 have no wired option at all; 77,000 are in a monopolistic situation; and 92,000 (43 per cent) have the bare minimum competition of more than one provider.

These figures take the minimum broadband speed of 25Mbps as the benchmark. That is sufficient if only one person is watching a high-definition video, or if several people are using low-bandwidth activities like checking social media or email.

You won't believe this but... everyone hates their cable company: Bombshell study lands

But, according to Minnesota's own goals, they want everyone to have 100Mbps by 2026 – enough for several people to use their devices and watch video at the same time. At that speed, competition shrinks still further.

There are 46,000 people (21 per cent) who simply do not have that option at any price, and a further 101,000 (47 per cent) who have a single supplier – Charter Communications. From there 30 per cent benefit from bare-minimum competition and just 3,000 people – all of them living in the center of Rochester – have real competition.

It's often hard to grasp the reality from figures and percentages so the report's authors have also produced a series of heat maps that show the impact graphically. The conclusions are obvious: only a very small number of people living in very central locations within big cities have anything approximating broadband competition.

This is all a very long way from the claims of massive competition that both the local and federal government exists in Rochester and is indicative of much large national problem where there is a huge disconnect between what people are really facing and what policymakers assume exists.

In its most recent report, the FCC concluded that there was sufficient broadband competition and so it did not have to use any of its powers – given to it by Congress – to push for greater competition.

But as this report – as well as many previous reports – points out, that is a wholly inaccurate conclusion, and Americans are being given a raw deal, paying too much for too little, while the largest ISPs continue to make vast profits by defending their local monopolies.

As we have pointed out previously, the broken reporting approach adopted by the FCC not only covers up the problems but actually reinforces local monopolies: so long as cable companies can claim there is competition in a specific census block, no resource are allocated to expanding competition.

Big Cable has even used the figures to argue for the removal of federal rules that give smaller ISPs a foothold in markets that they would otherwise be unable to operate within.

The ISLR report also notes another potential problem: the FCC forms are so convoluted and complicated that smaller providers have trouble filling them in.

"Large, de facto monopoly providers have incentives to overstate their coverage and territory to hide the unreliable and slow nature of their service in many communities," the report notes. "Small providers often have trouble completing the FCC Form 477… Larger providers have plenty of staff to handle the form and seem to benefit the most from its flaws, as this data is often used to determine whether government programs should invest additional funds into an area, often by a competitive grant program."

It also notes that some providers are massively exaggerating the true internet speeds they provide to consumers. "In our analysis, we discovered evidence that at least one provider in Rochester had exaggerated its download speeds when submitting FCC Form 477 by a factor of 24," it notes. ®