Keep yer plastic, says analyst: eSIMs aren't all they're cracked up to be

Interview eSIM-enabled phones are a solution to a problem that doesn't exist – and consumers are better off without it, according to analyst Dean Bubley.

The eSIM replaces the removable plastic chip card provided by mobile network operators with an embedded, programmable chip. Last week Bubley, founder of Disruptive Analysis, set off a debate inside the industry by pointing out that the benefits of eSIMs for the mobile consumer are questionable. Though it makes sense in industrial IoT applications for which the technology was devised, replacing the slots with the eSIMs in phones causes a lot of problems, he told us.

That's because so much is needed to replicate the freedom and choice that consumers have today.

"The eSIM is an IoT thing really, and it makes a lot of sense in a car, or a piece of industrial machinery that gets shipped around the world, such as an underground pump or a sensor. There, the cost of switching network might be lower."

And maybe in wearables like smartwatches, too, which are space constrained. But it's a solution with real practical pratfalls that the industry doesn't fully appreciate it.

"The manufacturer still has to pay for it. There may be enough gross margin on an Galaxy or an iPhone but $10, say, is a lot in a phone sold in Africa," he told us.

Then there's the commercial apparatus needed to replicate the vast choice offered today – which Bubley illustrated on a trip to the Cape Verde islands. He found no problem getting up and running in minutes after arriving. Now imagine what an eSIM world would look like.

"I can walk into a shop ... and I can choose the operator and a prepay or postpay deal over the counter. If you do that in software, how would that work?

"Then you get to the small print: how much data is included? Is it throttled? Does it include free Instagram or Spotify? All that's going to be a real pain."

There's more. If you drop your eSIM-only phone and it doesn't work, what happens next? Will your mobile operator conjure up emergency provisioning for another phone? Taking the bit of plastic out seems a lot easier all round.

Roam wasn't built in a day

But it is happening. Since Apple helped develop the original spec, presumably with saving space as their motivation, it's been given a consumer hue. Now manufacturers are beginning to toy with the eSIM as a second virtual slot for easier roaming. I have one such phone in front of me, and it's an unlikely pioneer: Planet Computing's Gemini PDA. 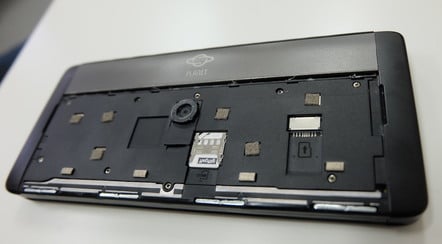 The Gemini PDA can support two SIMs, one a virtual eSIM
Click to enlarge

"I think we'll see some experiments," Bubley said. But this kind of hybrid dual-SIM approach brings in its own issues.

"Some operators might try managed roaming services – just as some did it with a pure Soft SIM which created a sort of grey market in SIM profiles. We had a weird group of roaming providers and MVNE [mobile virtual network enabler]-type organisations that sit in a twilight zone – quasi MVNOs. But unless there's some sort of breakthrough it's going to be slow."

In theory, eSIMs enable real-time switching between networks, so the device can hop to the best signal possible in any location. That strikes at the heart of the operators' business model – and it isn't clearer that with the operator incentives removed, we'd have better networks. Billions are spent on sites, equipment and fibre backhaul – in the hope of grabbing the consumer of the future. But why bother to invest at all, if you can't keep a customer for a minute, let alone a month?

That does seem to leave the eSIM where its inventors intended it to be: in industrial equipment, and maybe in your watch or your laptop.

Do read the LinkedIn post that started it. Dean's account of the Cape Verde mobile market is an eye-opener. ®