Google's passive collection of personal data from Android and iOS has been monitored and measured in a significant academic study.

It also reveals how phone users are being tracked without realising it. How so? It's here that the B2B parts of Google's vast data collection network – its publisher and advertiser products – kick into life as soon the user engages with a phone. These parts of Google receive personal data from an Android even when the phone is static and not being used.

The activity has come to light thanks to research (PDF) by computer science professor Douglas Schmidt of Vanderbilt University, conducted for the nonprofit trade association Digital Content Next. It's already been described by one privacy activist as "the most comprehensive report on Google's data collection practices so far".

Even if you don't use a consumer-facing Google service such as YouTube, many of the sites you visit on the web will be plugged into Google via the publisher and advertiser services: DoubleClick and Google Analytics.AMP mobile pages, hosted on Google, has also helped retrieve more valuable personal data. 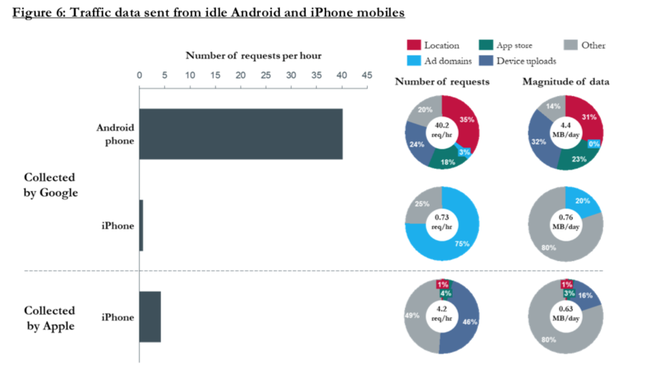 Google Analytics is used by more than three quarters of the top 100,000 most visited websites (including the one you're reading), while DoubleClick's third-party cookies are widely used to track users across the web. When Google acquired DoubleClick in 2007 it assured regulators it would never combine DoubleClick's cookies with its own. It abandoned that promise in 2016, attracting the (ongoing) attention of the European Commission.

The nature of some data may also surprise. App developers receive your age and gender whenever an app is launched, the study found.

Overall, the study discovered that Apple retrieves much less data than Google.

Moreover, there are no ad-related calls to Apple servers, which may stem from the fact that Apple's business model is not as dependent on advertising as Google's. Although Apple does obtain some user location data from iOS devices, the volume of data collected is much (16x) lower than what Google collects from Android," the study noted.

We invited Google to comment on, and debunk the study if it so wished, but have not yet heard back at press time. ®