Abracadabra! Tales of unexpected sysadmagic and dabbling in dark arts 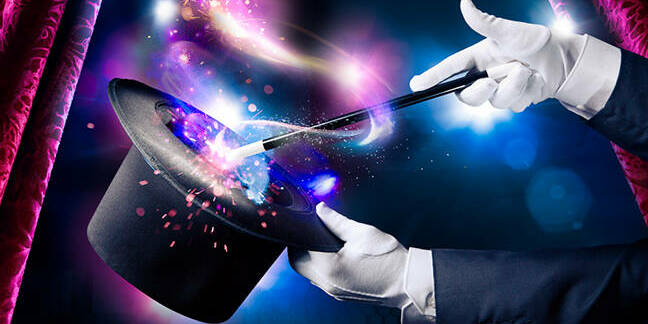 On-Call Congratulations, Reg readers – you've made it through the week, and those of you in England and Wales are now headed into a three-day weekend.

To celebrate, we've got a bumper edition of our weekly On-Call column of tech support crises. This time, it's a selection of tales from sysadmins who looked to the "dark arts" to fix their colleagues' troubles.

First up, we meet "Mike", who – shortly after moving into a new building with his company – fancied himself as something of a magician.

Many of the problems on the punch list he drew up were easily fixable, he said. "There were a few network connectivity issues due to loose connections in the floor monuments, and some peripherals that didn't survive the move – a few mice and keyboards needed replacing."

But the fix that brought Mike the most amusement was when a manager couldn't shut the top drawer of his filing cabinet.

"I noticed that the bottom drawer wasn't quite closed," Mike explained. "So I stood close to the filing cabinet... then loudly proclaimed, 'Abracadabra!' while waving my hands and - unseen by him - nudging the bottom drawer closed with my foot."

Our next joker, "Johannes", wasn't faced with such a lo-tech issue – and caused a bit more of a stir with his unsuspecting user.

"In the early '90s as a fresh PFY, I had been tasked with installing and rolling out a couple of dozen desktops," said Johannes.

"After two days I'd become rather familiar with the boot sequence, as these systems beeped and whirred a lot."

So, when he got a call a few days later complaining that the computer "didn't do anything", Johannes was able to put his newfound listening skills to the test.

"Having exhausted every other line of inquiry, I suggested he turn off the system, hold the handset to it, turn it on again and keep that handset there," Johannes said.

When the man-to-man conversation resumed, Johannes was able to tell him what the problem was and what keystrokes would fix it.

But Johannes maintained an air of mystery; when questioned, he simply said "I have my ways..." – a response that apparently had something of a lasting impression on the user.

"I later learned this user was extremely religious, and convinced I was dabbling in the dark arts," he said. "When I had occasion to visit his part of the building again a few days later he spotted me from the other hand of the hallway and fled into an office."

Our final tale comes from reader "Timmy", who wrote in to tell us of a time when the shoe was on the other foot.

"We work as level 2 support, and someone from our call centre was having issues with her computer so I was sent over to take a look," he explained.

"After the usual troubleshooting, I couldn't get the computer to turn on. I was stumped."

So Timmy disconnected the computer, brought it back to his desk and was brainstorming with colleagues when a co-worker produced... a rubber mallet.

"He calmly stood up, came over to the computer, and hit it squarely on the top," Timmy said. "He then told me to hook it up. I protested, but he was insistent."

Being the lowest in the pecking order, Timmy did as he was told and headed back to the call centre, where, with some trepidation, he hooked it back up and pushed the power button.

"You can imagine my disbelief when the dang thing whirred to life like nothing had happened. I stood there for a few moments in stunned silence before I headed back to my desk.

"To this day, I have no idea how or why that worked."

We hope the debate as to how the mallet saved Timmy – and whether Johannes really did scare the bejesus out of his religious colleague – lasts well into the long weekend.

In the meantime, send us your tales of tech support woes so we can continue to fill these pages with your proudest moments. ®