We've found another problem with IPv6: It's sparked a punch-up between top networks

Analysis We've discovered another reason why IPv6 is, right now, a poor substitute to IPv4: fisticuffs have broken out over the protocol on the internet's trunk roads, causing traffic jams.

In a report this month by Qrator Labs, researchers dug into what they are calling national internet reliability: the ability of a country's internet to handle a loss of connectivity from one or more ISPs.

And the results are intriguing, not least because IPv6 networks appear to be significantly less stable than traditional IPv4 networks even though you might naturally assume that they would be the same – it's just traffic and packets, right?

As you probably know, the internet is a network of networks. It works only because thousands of different companies all agree to let others' data flow across their networks and in return they allow the same. These are called peering agreements, and some come with various terms and conditions.

The internet is made up of tiers that group network providers in terms of size and bandwidth. There are fewer than a dozen top-tier companies that have huge pipes for shifting lots of data around the world. They have peering agreements with other tier-one providers in which neither side charges the other any money so that they can offer global coverage to the collective benefit.

These no-fee arrangements are also due to the fact that the amount of data flowing into, say, large network provider A from large provider B is practically the same as that flowing from A into B: it's a zero net situation, and there's no point invoicing each other for the same amount of cash for the bandwidth they've each used.

If you, as a network, fall into a tier where there's an imbalance on one side, then you have to start paying. Imagine small provider C runs a lot of internet traffic through large provider D, and D routes significantly less through network C. Now C has to cough up cash to D for that imbalance in bandwidth, otherwise it's getting a free ride.

When we're talking huge amounts of traffic, hundreds or thousands of terabytes here, hundreds there, it doesn't really matter: it's considered to work out to a net zero on average. When you go down the levels of tiers to smaller networks where differences in bandwidth are more obvious, then free peering agreements tend not to work – and someone inevitably demands money or some other consideration.

What has this to do with IPv6? Well, it appears that IPv6 may have given some companies an opening to the big leagues, with some trying to become tier-one providers for IPv6 and hence the future of the internet. And not everyone is excited about welcoming newcomers to the club.

This has resulted in a number of peering disputes – where one company refuses to peer with another for free or on terms they feel are unfair – and because of that, some parts of the world have far less resilience i.e. they are more reliant on a smaller number of companies to provide them with internet access.

The report notes that in 86 per cent of countries, IPv4 connectivity is significantly more reliable than with IPv6. IPv6 is, of course, supposed to be the internet's next-generation technology. There is nothing wrong with the protocol: it's triggering disputes between connectivity providers.

The authors are worried: "Explicit market calls for proper IPv6 service seem to be the only way to improve the situation. The Qrator.Radar team is considering different options to make this information transparent for every ISP in the world, thus improving community awareness of the problem."

The report specifically notes a long-running dispute between ISP Cogent and Hurricane Electric, as well as another between Deutsche Telekom and Verizon US.

"These telecoms may have different reasons for their conflicts, but if a network is connected only to one party in the conflict, it would not have full IPv6 connectivity," the report notes. "It also affects the reliability of ISPs with multiple upstream providers  -  the outage of one may lead to connectivity problems."

Cogent's fight with Hurricane Electric is so lengthy that there is even a video on YouTube in which a Hurricane representative reveals a cake with the message in frosting "Cogent (AS174) Please IPv6 peer with us XOXOX - Hurricane Electric (AS6939)." That was back in 2009.

Cogent CEO's acknowledges his company has been in more peering fights than any other Tier 1 provider and puts that down to the fact that his company's entire business is internet provision, whereas other providers exist in a broad range of telecommunications markets. 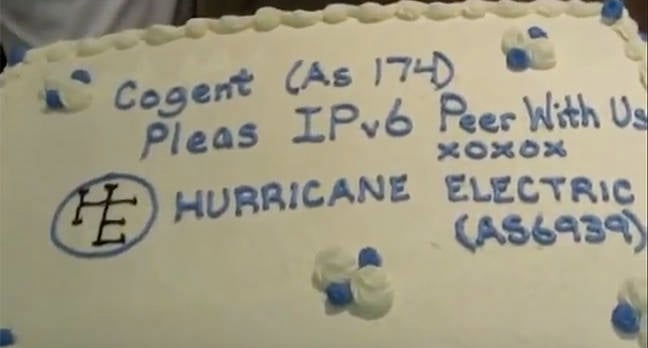 Hurricane Electric's special cake for Cogent urging it to peer with it.
It didn't work

Cogent also only survives among bigger predators by relentlessly focusing on the bottom line, offering the lowest prices through constantly updating its systems to get an edge, and not entering into any agreements where it doesn't think it will financially benefit.

These tensions are bigger in IPv6 where other Cogent-like companies are threatening its position. That has resulted in a refusal to peer with them and – according to Qrator Labs – caused greater instability because countries can't rely on multiple companies to provide them with access.

"To maintain global connectivity under IPv4, any single path to a Tier-1 provider is adequate. But in IPv6 this may not be enough," it notes. "Due to ongoing peering wars between several Tier-1 providers in IPv6, they are not all connected to each other."

As well as refusing Hurricane entry into the IPv6 big league, Cogent is also fighting with Google for much the same reason.

But there another detail in the report that suggests Cogent's belligerent dominance may be waning: it lost the top spot of importance in the United States.

Local monopolies are something that almost every big cable company in the US has built their business model and lobbying efforts around, even though the rest of the world's advanced economies are less convinced and almost universally offer faster internet speeds to consumers at lower prices.

Another intriguing aspect of the report is one country in the top 20 that is dangerously reliant on a single company for IPv6. According to Qrator Labs, China through China Telecom is completely reliant on a single provider for its IPv6 support – Hurricane Electric – and that gives it a staggering 65 per cent on its index for IPv6; something that should not be the case for such a large and vibrant economy.

There is good news however, at least in the case of China. We checked today and literally this month, China Telecom has entered in peering agreements with Telia, NTT and GTT – the graphs show a huge step up in IPv6 prefixes. 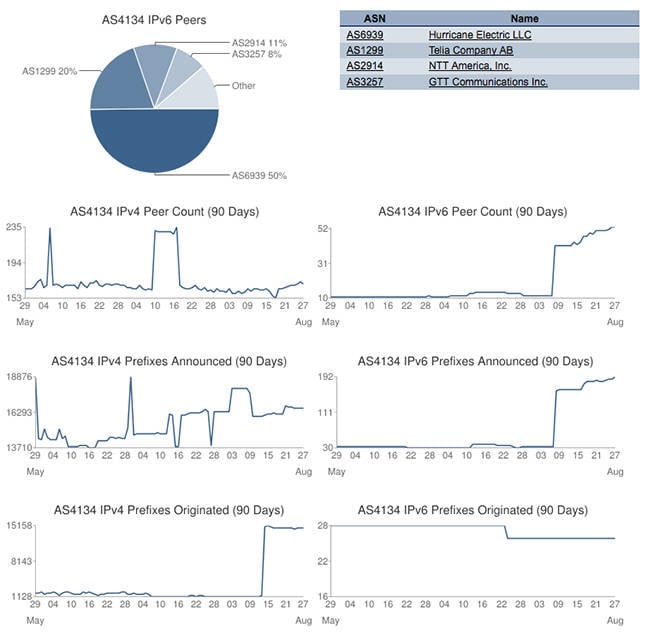 Until this month, China was massively reliant on a single company for its IPv6 connectivity. New peering agreements appear to have solved that.

At the absolute bottom are countries reliant entirely on one company for their internet. This is typically a conscious decision by a controlling government, or due to a country being extremely isolated.

Those with 100 per cent on Qrator Labs index include North Korea, Eritrea, Greenland, and New Caledonia. Then you have Ethiopia's 99 per cent dependency; Syria's 99.5 per cent, and so on. These dependencies ebb and flow – for example, Syria's civil war has seen a German company drop out of the market and leave the country reliant on just one company.

At the other end of the scale are hyper-connected modern economies with strong competitive streaks. Germany steals the show with a 2.26 per cent IPv4 outage percentage – meaning that it has so many large companies providing internet access that if any one of them fell over, it would barely have an impact on internet users. Next up is the UK – which has long been a center of telecommunications with 3.10 per cent and so on.

IPv6: It's only NAT-ural that network nerds are dragging their feet...

Qrator Labs has done this survey for three years and notes that 17 of the top 20 last year are also in this year's top 20, so this is a foundational country-level measurement reflecting the importance of the internet to a nation's economy and society.

There is plenty more in the report, including a recent rise in resiliency in Asia and some question marks over countries like Jamaica and Monaco, but the authors have a clear conclusion:

"Our survey clearly shows that ISP markets that are built upon competition develop, in the end, to become much more stable and failure-resistant, in regards to risks from within or outside the surrounding region. Without a competitive market, a single AS failure could lead to network loss for a significant portion of users from a country or even a broader region." ®

Subject to conditions: offer only valid if you can get Starship off the ground
Networks2 Dec 2022 | 7

As for Twitter, politicians need to grow thick skins and stop mistaking it for advertisement
Software2 Dec 2022 | 80