It may be the oldest and largest planet, but it took a long time 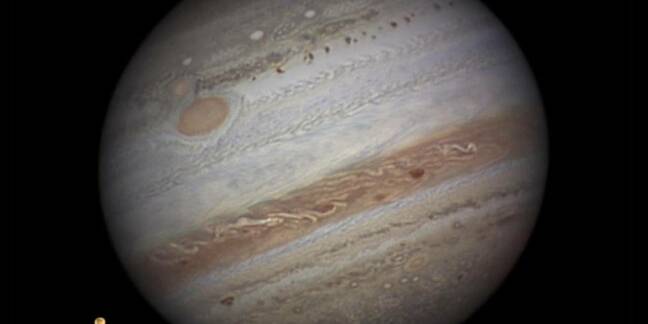 Jupiter may be heavier than all the other planets in the Solar System combined, but it took a surprisingly long time to balloon in size.

The gas giant is the fifth planet from the Sun and is the oldest planet, known for its magnitude and number of moons. It’s swollen and puffy with hydrogen gas, and measures about 318 times the mass of Earth. It’s also so big that if it gained any more mass it could potentially shrink – all the gas would violently compress into a small ball, and it could possibly turn into a star.

But despite its sheer size, the planet experienced growing pains and expanded pretty slowly at times during its development, according to a paper published in Nature Astronomy on Monday.

"How could it have taken two million years for Jupiter to grow from 20 to 50 Earth masses?" said Julia Venturini, co-author of the paper and a postdoctoral researcher at the University of Zurich. "That seemed much too long. That was the triggering question that motivated our study."

A team of researchers from the University of Bern, the University of Zurich, and ETH Zürich calculated the times it took for Jupiter to mature by studying isotopes in meteorites. Previous studies found that there were two distinct nebular regions that spawned meteorites during the early stages of the Solar System. These was a large gap in between them at about a million years and three to four million years after its formation.

That gap is, apparently, where Jupiter started forming. Like all planets, Jupiter grow by accretion, where chunks of mass are trapped in a disk and spirals into a body so it gains mass over time.

"We could show that Jupiter grew in different, distinct phases," said Venturini. It happened in about three stages. "During the first stage the pebbles brought the mass," Yann Alibert, co-author of the paper and a researcher at the University of Bern explained.

"In the second phase, the planetesimals also added a bit of mass, but what is more important, they brought energy." The energy heated the young Jupiter’s atmosphere and prevented it from cooling down, where it could contract and accrete more mass.

The growth slowed and it stayed in that state for about two to three million years, eventually reaching 50 times the mass of the Earth. After this, the accretion process was dominated by gas instead of pebbles and planetesimals, pumping it to its present size, over 300 Earth masses. ®