NetApp puts the pedal to the metal with Plexistor

It's on a smashing orange gig with an Optane silver bullet

MAX Data, it is daring to hope, might actually be a silver bullet competition killer. This is revealed in a NetApp MAX Data podcast.

MAX Data presents a POSIX file system interface to applications - they don’t need to change - and tiers data from an underlying block device, an ONTAP all-flash array, into persistent memory. The persistent memory is Intel’s 3D XPoint in DIMM form and data would travel between it and the underlying ONTAP flash box across an NVME over Fibre Channel (FC-NVMe) link, NetApp having announced ONTAP support for FC-NVMe in May.

The podcast people say that a server equipped with the Plexistor driver and Optane DIMMs could deliver single digit microsecond data access latency to applications; that’s literally something between 1 and 9μs. They say an Optane DIMM has a 10μs latency.

Plexistor’s driver cuts out a huge amount of the Linux IO stack, doing straight memory semantics, and while the podcasters don’t provide an actual number they do enthuse about how freaking fast MAX Data is. 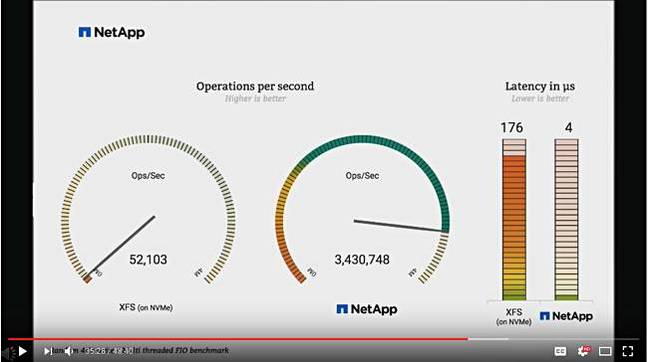 We’e told writes will always be at local speed whereas reads are tiered under a hot and cold formula, with a formula for how much PM you would need to cache a back-end database.

With ZUFS tiering data out to and from the FC-NVMe-attached ONTAP array that means data written to PM gets out to the ONTAPO box and benefits from its data management and protection capabilities; snapshotting, replication, and tiering out to the public cloud using NetApp’s data fabric.

NetApp people have tested that it works with skinny ONTAP arrays too; the ONTAP SELECT product and ONTAP in the public cloud, and it does.

They have tested the Plexistor SW with containers and it accelerates their data access. They are having thoughts longer term about seeing if it could accelerate a NAS back end, or actually run in the public cloud.

The NetApp podcasters are keen on the idea that NetApp is smashing orange (hint; the colour of Pure Storage) and confident they will move upwards and rightwards in next year’s Gartner SSA MQ. They don’t say they could overtake Pure and become the literal leader of the Leader’s quadrant but you can bet they’re thinking it.

They are confident this technology is unique; no one else has it and NetApp will rule the roost.

It’s not for all server applications; only the ones that need screamingly low latency, such as the usual financial trading ones, and any analytics on largish datasets (say up to 3TB) needing to be in memory, meaning DRAM plus persistent memory, and run in real time. Think AI and machine learning and high-frequency transaction processing.

NetApp is dependent on Intel delivering Xeon CPUs with Optane DIMM support, and that should be the Cascade Lake SP processors slated for late 2018 availability.

Expect more MAX Data marketing and evangelism at NetAp’s forthcoming Insight events. The NetApp podcasters are hugely and deeply excited by the prospects of this technology and think they can take over the block array low-latency access world with it. They think their Plexistor technology is a silver bullet that can kill a lot of the demons that have dissed NetApp in the past.

Oh how they wish, how they do wish, that they are right. ®