I've seen the future of consumer AI, and it doesn't have one

IFA I didn't see a blockchain toothbrush at IFA in Berlin last week, but I'm sure there was one lurking about somewhere. With 30 vast halls to cover, I didn't look too hard for it. But I did see many things almost as tragic that no one could miss – AI being squeezed into almost every conceivable bit of consumer electronics.

But none were convincing. If ever there was a solution looking for a problem, it's ramming AI into gadgets to show off a company's machine learning prowess. For the consumer it adds unreliability, cost and complexity, and the annoyance of being prompted.

How is this so? There are clearly some use cases where, empirically, the statistical predictions made by neural networks has improved the output - speech recognition is a clear example. There are 44 English phonemes: overlapping nets help add valuable context that produce more accurate guesses (and remember, this is all about guessing). And then... there are some use cases that aren't improved. These turn out to be quite numerous. 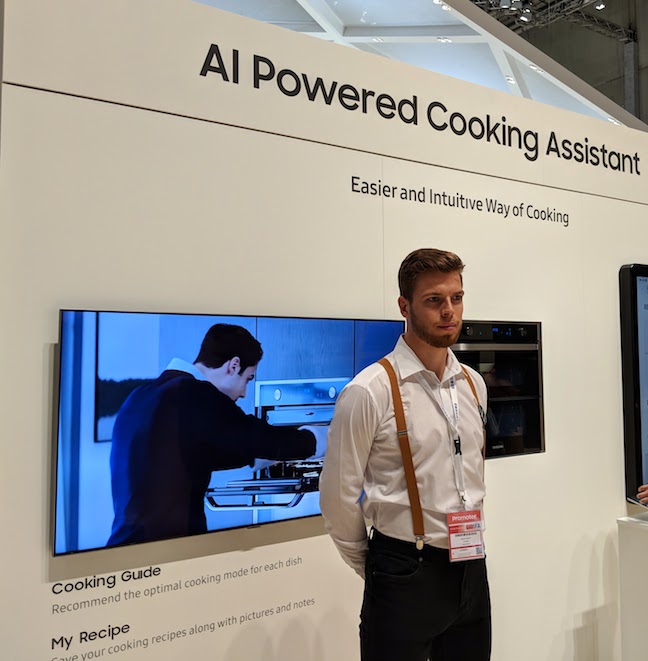 In Berlin, I saw two desperate armies converging on the battlefield of consumer AI: white-goods manufacturers looking to add value and margin, and technology companies looking to get into new areas of consumer electronics. LG and Samsung are both, with decades of white goods and tech behind them. As you might expect, both are smitten by AI, LG even more so than its bigger rival, and their vast floor space touted this loudly.

For LG it's a fairly indiscriminate application of AI - with everything rebranded "ThinQ" and fairly limited in what it can do.

LG, Google and Innit trumpeted a smart kitchen. How is it smart? Well, there's "voice control, step-by-step guided cooking, and automated expert cook programs". We learn that "consumers may have had to open up six or seven apps to get the help they need cooking, including nutrition information, recipes, shopping lists, how-to videos, and remote control apps for various devices", but now they can "enjoy a single elegant journey".

How is it smart, though? 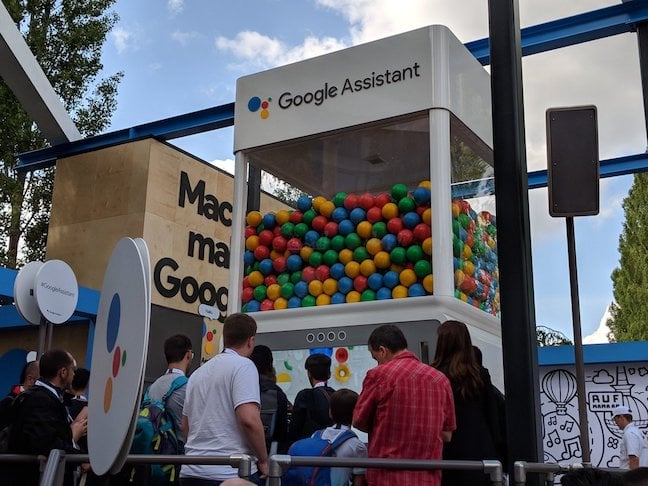 A big queue for the coloured balls

For example, LG says, if a fridge "knows" there's a chicken in it, you select a recipe and the oven comes on to start roasting. Most of my very limited number of chicken recipes were learned years ago, however, and when I'm browsing for new ideas, I don't necessarily want to start cooking right away. And perhaps like me you need to clear the oven of ancient metalware and possibly flammable material before it's safe to turn on. I wondered how many fires AI will start?

I suppose a connected oven will tell you, and hopefully the fire brigade, that your house is on fire. The AI at the smart insurer can then hike your premiums.

Then there's this happy household:

Sadly, this is not an example of teleportation, with the oven being summoned magically to the bedroom, like Davros summoning up his army of Daleks. It's plain old remote control.

Did Samsung have any better ideas? Not any new ideas, as far as I could tell. The Family Hub (an iPad on your fridge) is now quite old. The plan remains to put Bixby everywhere, although just about every other big vendor is building in Amazon's Alexa – which is already looking like it's won. Bixby isn't as good at speech recognition as Alexa, which is good enough.

My theory for Amazon's success with Alexa is not that it was first, but that it doesn't actually fake being smart – or far less than you would think. With its vast data troves (including what you buy), the conventional wisdom is that Google must win in AI, and in theory this seems to be a compelling advantage, as it has greater contextual awareness than anyone else can muster. But Google's AI is doing it all wrong. It's trying to be "smart" – it's trying to be helpful – and most of the time Alexa isn't. It tries not to help. It STFUs. To the amazement of nobody except AI evangelists, and Google, people seem to prefer this.

Back to LG, which takes 2018's prize for sticking AI into a superfluous gadget. 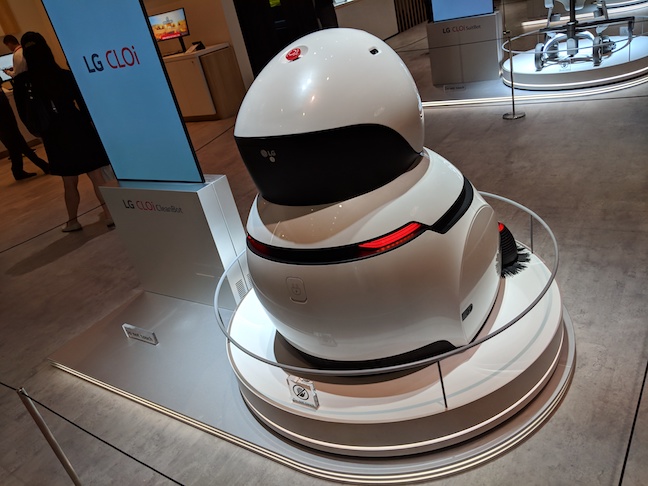 After earlier disasters, the LG ClOi was kept in the kennel

The centrepiece of its AI efforts this year is a robot, ClOi. Put Google Assistant or Alexa on wheels, and you have ClOi. I asked the booth person what exactly ClOi could do to be told "it can take notes for your shopping list". Why wasn't this miracle of the Fourth Industrial Revolution let loose on the LG floor? I wondered – a question answered by this account of ClOi's debut at CES in January. Clearly things haven't improved much – this robot buddy was kept indoors.

In fact, one company stood out as immune to F_AI_L-itis, whether through accident or design, I don't know. And that was Sony. 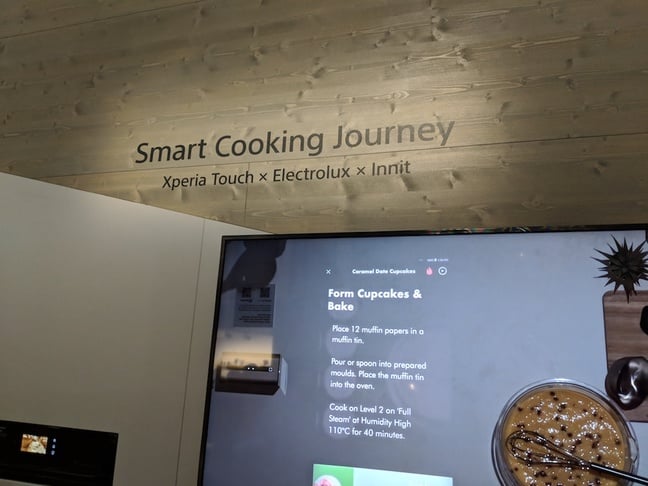 Sony is staying out of smart nonsense, this being a mere nod to the trend

I suspect it was through design. Sony isn't daft: it knows what consumers want through trial and error, across lots of product categories. It's been burned many times. It's also been developing its Aibo robots for almost 20 years so is aware of the limitations. It doesn't expect that plastering AI across the marketing literature allows it to leap into a new market as if by magic. Someone should tell LG. 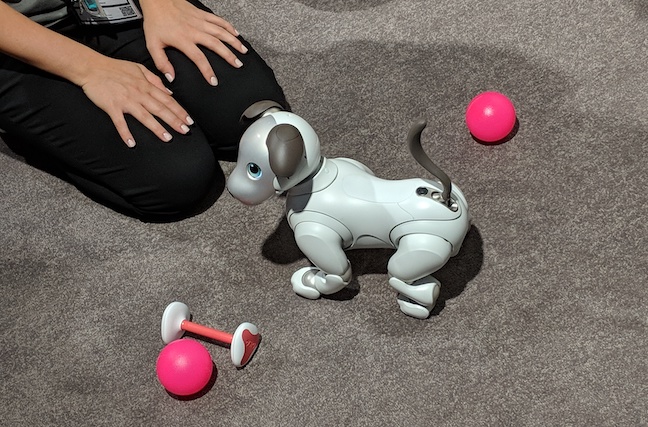 To go alongside Turing and Asimov, we can usefully develop a new rule for whether consumer AI will fail or not. Does it interrupt or divert the individual from what they wanted to do?

I told you all this here. It's nothing you don't know. The addition of "smart" features too often entail prompting you to take a course of action, or even preemptively taking control of things. This was very evident from so much of the technology on show in Berlin. The loss of agency is often at best irritating, and sometimes a deal-breaker. The assistant that assists too much – through prompting and even grabbing the metaphorical steering wheel – is inferior to the one that doesn't. It's just a solution looking for a problem.

This has been a theme of the AI-assisted imaging appearing in smartphones in 2018 – for a roundup, see here. And some of the most extreme examples appear in this piece on Huawei's P20 Pro. It can take amazing photos, but as Android Authority also notes in a similar shootout: "Most of the time, it's preferable to leave the AI setting off."

And when you buy a spoon, you don't expect to have to train it. So there's that, too. ®