Stop, collaborate and listen: Ice is back we need a brand new invention

UK.gov and Canadian airliner manufacturer Bombardier want you – yes, you – to come up with ideas for using artificial intelligence to stop ice building up on aeroplane wings.

In-flight icing is a problem for airliners. At certain combinations of height, pressure and humidity, ice tends to form on the wings of aeroplanes. If the ice isn’t melted off – either by descending into warmer air or by using heaters or de-icing fluid – it makes the aeroplane heavier and its wings less aerodynamically efficient, meaning the plane burns more fuel.

A larger fuel burn means spending more money and tolerating more noxious emissions into the atmosphere. At worst, ice build-up on the wings can be enough to change their aerodynamic shape and make them produce less lift, meaning the aircraft starts to … descend.

The Department for Business, Innovation and Skills, along with Bombardier’s Belfast-based wing factory, are looking for ways that AI can be used to stop ice build-up. Now, while Vulture Central’s first thoughts on this challenge were “why not use these” … 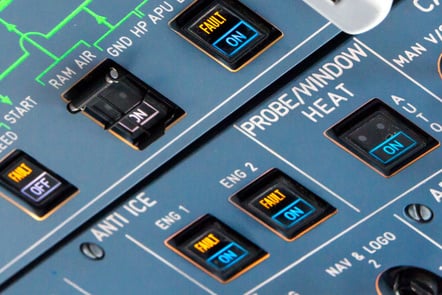 ... yep, we mean the anti-ice dispensers and the probe/window heaters to dissolve and melt ice off the important bits...

… the true situation is a little more complex than that. On a typical airliner, anti-icing gear is rigged in the engines (to stop ice building up on the turbine blades and blocking engine airflow) and on the leading edges of the wings.

Current practice is to wait until sufficient ice has built up on the leading edges before giving it a blast of the de-icing heaters. This ensures the ice breaks off in chunks and flies away. Naturally, this means that the pilots have to keep an eye out for ice formation when they could be better employed flying the aircraft.

Why not just switch the de-icers on all the time, like EU-approved car headlights? They drink a lot of juice, is the answer – heaters effective enough to clear ice from cold-soaked airliner wings draw an awful lot of electrical current. Increased electrical demand means the engines burn more fuel to power the onboard generators. In addition, if freezing water is instantly pushed away from the leading edges it can start to form clear ice on top of the wings or even underneath them, away from places where current de-icing gear is fitted.

One potential use for AI could be linking it to some kind of sensor array on the aircraft’s wings. When ice is detected, the heaters – and potentially anti-icing fluid dispensers – could be triggered.

Whatever the ultimate answer, Bombardier’s Dr Fassi Kafyeke said in a canned quote: “With this challenge, we are creating opportunities for a potential collaboration that could evolve our on-going research in icing dynamics and further improve the predictions of our simulation.”

As well as solving the ice problem, the idea is also to deepen R&D links between the UK and Canada. Interested Brits can send their ideas to the Digital Catapult, UK.gov’s tech innovation bods. ®