It's been 5 years already, let's gawp at Microsoft and Nokia's bloodbath

Rewind and replay in slowmo

In hindsight, much of the anger directed at Elop and Microsoft looks like blame shifting.

Not wishing to rehash a story told many times before here at El Reg, Nokia's fall from its 2007 zenith was entirely down to its management while it was still Finn-owned.

The conventional wisdom today is that Nokia was blindsided by the iPhone. This version of history flatters Silicon Valley enormously. Nokia was acutely aware of its current marketplace leadership being eroded by unexpected events – "everyone had read The Innovator's Dilemma," an insider told us – and it had carefully put contingency plans in place. In 2002, it embarked on a project for the day when phones with a bit of computing would become computers with added phones. This became their Linux project, Maemo, later Meego. Nokia also anticipated Google undercutting the market for licensable operating systems, and was prepared to take radical steps like making its platform open source. Nokia was full of clever people. It just couldn't execute.

In his memoirs, former chairman Jorma Ollila later admitted as much: the company had lost its confidence. See this article from 2010, based on interviews with 15 Nokians.

In 2004, Ollila restructured Nokia around the mass production of components, which would be fitted into products on a master grid. Infighting was encouraged, which inevitably produced fiefdoms. The model was ripped up in 2007, but the inertia continued. My favourite example relates to the UI that Nokia desperately needed to complete for its Linux as Android loomed over the horizon.

For reasons known only to themselves, the Harmattan UI team had drawn inspiration from an obscure Russian psychologist, Lev Semyonovich Vygotsky who died in 1934. "The goal is to understand society, personality and, most importantly, how these two are connected," it was said at meetings, which pored over diagrams like this one: 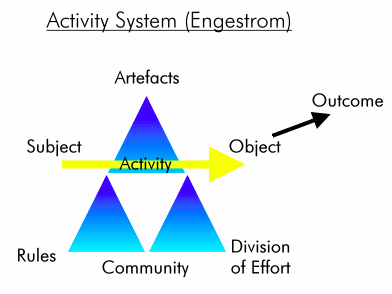 Huge effort was wasted on theories nobody could understand

It was incomprehensible garbage, and all the work was thrown away at the end of 2009. That was one example. Thanks to a consensus culture in which anyone could chip in, or say no, thousands of man years were eventually wasted on UIs that didn't work.

Appointing Elop and betting the farm on a brand new outside platform was a classic "Hail Mary" pass, but it never needed to happen. Nokia's board had decided it was so dysfunctional, it couldn't cure itself – an outsider was needed to change it.

If Nokia's open-source Linux had been ready to ship in 2009, and Nokia had freely encouraged competitors to use it, it could have been the Android. Maybe. Not a big chance, but a chance all the same. As it turned out, when Nokia tried to license Meego, nobody wanted to touch it. Nokia remained a competitor in handsets for any potential licensee, and that ship had sailed.

Elop was the "fall guy for years of Finnish folly," we wrote here a year after the deal was closed.

But that isn't the complete picture either. Something else is missing.

After the February 2011 deal that committed Nokia to Windows Phone, Nokia was then hung out to dry by Microsoft. Before it took over the phones unit, not after. Elop did not intend to "Osborne" Nokia's uncompetitive Symbian smartphones, he and his team had underestimated how much work needed to be done to Windows Phone Series 7 to make it competitive.

Firstly, WP7 was brand new in October 2010 – and wasn't as mature as Nokia thought. Then Microsoft threw its efforts into putting the car on a new chassis – swapping out the kernel and middleware – rather than adding features. Google was able to add these features to its Java-based Android much quicker.

That left Nokia with almost nothing to sell throughout 2011 and 2012. The numbers were terrible. Lest we forget, Nokia was bleeding so much red ink Elop had to do mass layoffs too – 10,000 in one go. Microsoft was making €1bn-a-year platform payments to Nokia, but what Nokia really wanted was to go to market with a competitive portfolio of exciting new kit.

This seems to have been overlooked by everyone. It's corroborated in David Wood's book on the smartphone wars, written from the perspective of an insider with lots of access. From the respectable but not remarkable Lumia 800 in November 2011, to two devices unveiled 12 months later, not one Windows Phone appeared – but which were still hard to buy (thanks to a carrier exclusive for the flagship 920). By November 2012, Nokia had been overtaken by LG, ZTE, Huawei and even Lenovo in smartphone sales.

So while Nadella's butchery was clumsy, and made worse by an inability to communicate clearly, the die had already been cast.