Feel the shame: Email-scammed staffers aren't telling bosses about it

Fraud on rise and IT workers (of all people) most susceptible 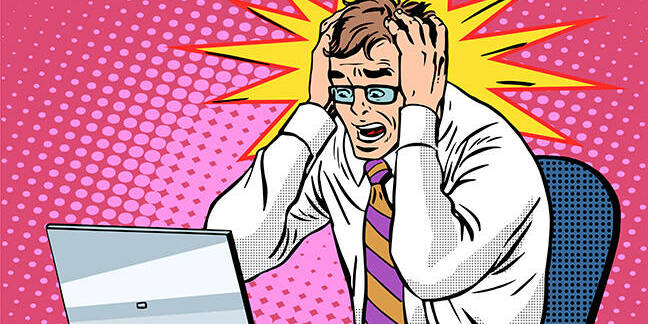 The number of UK companies on the receiving end of business scams involving email has risen by nearly two-thirds – 58 per cent – in the last year, new data from Lloyds Bank has revealed.

IT workers are among the most susceptible to falling victim, along with those working in legal firms, HR and finance.

So-called "tech savvy" – the survey's words, not ours – millennials face the highest risk of being targeted, with more than one in 10 falling victim or knowing someone who'd been a victim.

The most popular impersonation tactic by such con artists is to try to persuade staff inside an organisation to change bank account details by posing as a supplier, or by spoofing emails that appear to be from a contact or manager to achieve the same.

Chillingly, Lloyds – which polled 1,500 SME employees – found that more than a third are not even sure how to identify these fraudulent emails.

Half of those asked said they'd encountered scammers who had posed as their boss, with about the same number experiencing the same ruse for a supplier.

Shame is making things worse: a quarter of victims of impersonation fraud were apparently so ashamed they decided to hide their mistake from their team for fear of being fired.

Clearly a dodgy move as a fraud that goes unreported can grow, with fraudsters able to continue to access systems and data or make rogue payments using the compromised details.

The survey is part of the government, National Crime Agency, Ofcom and private sector's Get Safe Online campaign. The report said up to 8 per cent of SMEs – nearly half a million businesses – might have fallen victim to BEC fraud at some point.

No reason was given for the surge in SMEs, but with hundreds of business transactions and interactions happening a day and with SMEs typically understaffed and under-resourced, it would be difficult to verify all emails, and individuals are left to make decisions based on assumptions. It could also be argued that BEC is difficult to solve because it is a form of social engineering.

Email, meanwhile, remains weakly authenticated and easy to game – even when companies move to cloud-hosted services such as Office 365 and G Suite. ®