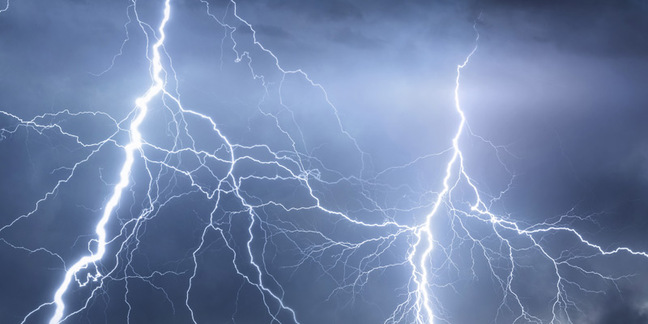 Grim weather at Cape Canaveral almost caused a scrub of this morning's Falcon 9 launch as heavy cloud and lightning storms blanketed the region.

Rocket fans remember all too well the fun and games that happened in 1969 when Apollo 12's Saturn V fired through the clouds. A lightning strike left engineers and astronauts scrambling to restore telemetry. Since there is no human aboard a Falcon 9 to flip a "SCE switch to Aux", launching into lightning is not advised.

And, of course, there is the whole exploding thing as lightning strikes tanks full of volatile rocket fuel.

SpaceX originally planned to get the Falcon 9 off the ground at 0328 UTC (2328 EDT on September 9) this morning before tweeting a slip to 0400 UTC (0000 EDT). The boffins continued to eat through their four-hour launch window while they waited for the weather to improve before lighting the touch paper at 0445 UTC and sending the Falcon 9 to orbit.

There have now been 50 Falcon 9 launches from Cape Canaveral and this morning's was the 12th of 2018 from the venerable complex, including the showboating Falcon Heavy from one of the old Apollo/Shuttle pads. SpaceX plan at least another six launches from the East Coast in 2018, including a resupply mission to the International Space Station in the form of CRS-16.

The rocket itself consisted of a brand spanking new Block 5 Falcon 9 first stage, which SpaceX recovered. There remains no way to get the second stage back to earth in one piece, and SpaceX did not attempt to recover the payload fairing this time around.

The Block 5 version of the Falcon 9 benefits from lessons learned in re-usability and reliability from earlier versions and Musk hopes to drastically cut the time needed to check and refurbish the rocket between flights. The launch marks the fifth time this line of Falcon 9s has flown and the fifth time the first stage has been recovered, delighting the SpaceX fanboys with yet another successful touchdown, this time aboard the drone-ship "Of Course I Still Love You", stationed out in the Atlantic.

The payload, Telstar 18 VANTAGE, is the third of Telstar's fleet of high throughput satellites (HTS) and its coverage at 138 degrees east will reach from Asia to Hawaii once the thing has made the trek to its orbit, a hair over 22,000 miles (35,405km) up.

A successful deployment of the spacecraft into transfer orbit by the Falcon 9 was confirmed at 05:18 UTC, and the Telstar will use its own engine to get the rest of the way, as planned. The satellite is expected to function for at least 15 years once commissioned.

HTV held up while tracking stations wait out a typhoon

All has not gone so well for the Japanese space agency, JAXA. The launch of the Mitsubishi HTV-7 cargo craft was delayed thanks to a typhoon straying a little too close to a Guam tracking station. Worried officials had little option but to delay the mission, originally due to launch on 11 September.

The freighter, named Kounotori (or "white stork"), can carry up to six metric tons of pressurised and unpressurised cargo to orbiting astronauts, and this time is due to loft replacement Li-ion batteries to replace the aging units on board the ISS. Some additional science racks and a glovebox as well supplies for the crew have been packed.

Most interestingly, this HTV also includes a technology demonstration of the HTV Small Re-entry Capsule, which Japanese boffins hope will able to return experiment samples to earth. Since the shuttles were retired, cargo can be returned via only SpaceX's Dragon or whatever can be shoehorned between astronauts aboard the Soyuz.

No new launch date has been announced. ®

16 hours of rocking and rolling before the power runs out

Agency releases analysis of why the satellite broke up

Hayabusa2 stirs up rubble on surface of Ryugu, pokes asteroid with sampling horn