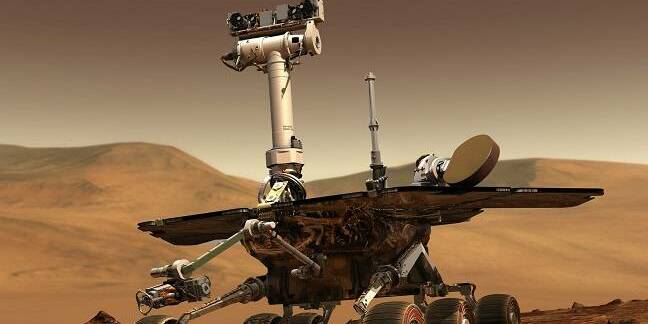 As skies clear over NASA's stricken Mars Rover, the clock has begun ticking for Opportunity to call home.

A Martian storm, which engulfed NASA's solar-powered trundle-bot, Opportunity, is clearing, with boffins reporting that the amount of haze in the skies above the robot has finally dropped below 1.5 tau for two consecutive measurements, according to a statement issued by the Jet Propulsion Laboratory (JPL) last night.

The figure is significant since NASA previously announced that milestone would be the start of a 45-day intensive listening period in the hope the robot wakes up. Boffins also intend to bombard the poor thing with commands to communicate in the event of a clock fault condition due to the cold and scarcity of power.

Not a peep has been heard from the long-lived robot since its last plaintive squawk on 10 June, after which there was insufficient solar energy to keep the batteries charged as Mars was engulfed by a global dust storm. Images from the Mars Color Imager (MARCI) aboard the Mars Reconnaissance Orbiter (MRO) indicate that the storm is subsiding, with MRO Project Scientist Rich Zurek reporting "no active dust storms for some time within 3,000 kilometres of the rover site".

Hopefully that site will not end up being the final resting place of the elderly rover.

The 45-day period is significant since NASA has concluded that no response after that time will mean that the Martian cold could have caused "some type of fault from which the rover will more than likely not recover", according to John Callas, Opportunity's Project Manager.

No response by the end of 45 days is not necessarily the end of the road for the rover, although NASA will probably give up trying to send commands to the thing. There would still remain the possibility that a build-up of dust on the solar panels of the robot could be swept off by a dust-devil cleaning event so the boffins will continue to listen passively for any signal, at least through January.

Opportunity has confounded mission expectations by lasting 60 times longer than originally planned and covered 28 miles over its lifetime. The teenage droid has lost the use of both its front steering wheels and its onboard 256MB of flash memory no longer functions. However, the robot has continued to perform useful science even as its facilities deteriorate, in spite of the best efforts of Earthbound bean-counters to kill it off.

With the clock ticking for Opportunity, and we at The Register anthropomorphising the plucky little trundle-wagon perhaps more than we should, it may be only a matter of time before Randall Munroe issues another fitting tribute to a stricken Mars Rover. ®