WWII Bombe operator Ruth Bourne: I'd never heard of Enigma until long after the war

Interview El Reg had the honour of speaking with a war hero last Friday when the UK's National Museum of Computing fired up its replica Enigma code-breaker to decrypt messages sent from Poland.

Ruth Bourne was among hundreds of Wrens who worked on the front line of code-breaking on 200 or so Bombe machines1 at sites in and around Bletchley Park. This often pressurised work took place over eight-hour shifts and around the clock.

After she signed the Official Secrets Act, Bourne was told her work involved "code-breaking enemy messages" and no more. "I never even heard the name Enigma until long after the war," she said. 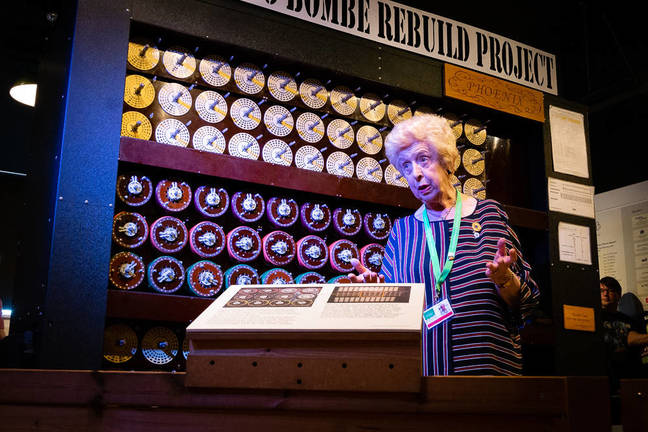 Enigma was a field encryption device used by units of the German Wehrmacht (military) during the Second World War. Encrypted messages were sent by telegraph. Wheel settings of the Enigma were reset across the whole network every day, usually around midnight, creating a new key.

The process started with the interception of the Enigma-encrypted Morse code messages, which were then forwarded to Bletchley Park (aka Station X).

Code-breakers at Bletchley and other sites used by the wartime Government Code & Cipher School (GC&CS) scrambled to figure out the day's key. The Turing-Welchman Bombe, designed by Alan Turing and Gordon Welchman based partly on an earlier Polish design, was the electro-mechanical machine that somewhat automated the process.

Once the wheel and plug board settings had been determined, it was possible to read other Enigma-encrypted messages sent throughout the same day and evaluate the intelligence (codenamed Ultra) they contained.

Bourne, 92, worked in code-breaking at Bletchley Park's satellite sites of Eastcote and later Stanmore between the time she volunteered in May 1944 until VJ Day, the end of the war.

"By the time I joined up there were very few Bombes at Bletchley and I think they were there for training anyway," she said. "I think we finished up with 213 Bombes and they couldn't all be in the same place, certainly not on the Park, because [Bletchley] was full of Colossus machines [valve-made electronic computers used to break the Lorenz cipher used by German High Command].

"After the atomic bomb was dropped [Hiroshima, Japan, August 1945] we stopped using the Bombes and started to dismantle them."

It was literally drummed into us that we must be accurate otherwise a lot of very important work by very clever people would be ruined – Ruth Bourne, WWII Bombe operator

Bletchley Park's code-breakers are credited by historians with shortening the war by two years. Asked if she realised the importance of her work at the time, Bourne said: "No, not at all." The then 18-year-old was almost completely in the dark.

"We were only ever told, after we had signed the Official Secrets Act, and gone through a lot of other palaver, [that] 'We are breaking German codes'. That's a five-word sentence and that's all I ever knew. We didn't know about Enigma. We didn't know anything about how the Bombe worked or how it related to the Enigma machine [either].

"I was just putting wheels on and taking them off and putting plugs in and so on."

Code-breaking work "involved – more than anything else – being accurate," Bourne said.

"It was literally drummed into us that we must be accurate otherwise a lot of very important work by very clever people would be ruined. So we had to be very alert.

"I have to say that [working] from midnight to 8 o'clock was very, very tiring indeed."

The work itself was intense. "On watch it was like everything to do with the code-breaking and every code-breaker at Bletchley or wherever they were – what we had in common was pressure," Bourne said. "Simply because when the Germans changed the code at midnight, and they could even do it more often ... If you wasted time then the information that you eventually decoded would be no good because everything would, obviously, have already happened."

Fatigue was a real and present risk to the operation. "I think personally it was pressurised and a lot of the girls didn't manage very well but you could always get time off if you became ill – what they called burnout. I got two weeks off. That was nice."

Paul Kellar, an engineer involved in the multi-year project of reconstructing a working Bombe, on display at the National Museum of Computing since June, told El Reg about aspects of work by Gordon Welchman that made code-breaking using the Bombe feasible.

"The Welchman diagonal board made it a success and allowed the Bombe to work with weaker, shorter cribs2 and with fewer false positives."

We asked Bourne how the reconstruction compared to the original Bombes.

"I'm not a technician – and it has been a very long time since I've seen the original – but it's very, very familiar. It's a facsimile," she said.

"Not having the memory that I should have being 92... nevertheless I could just operate it now and, if I had another person with me, I could even plug it up."

If anything, the reconstructed Bombe is too pristine to be mistaken for its wartime predecessors.

"It's pretty good. Except the present one looks very clean and new, whereas when I was working all the drums were battered and chipped and the plugs at the back were not strong and firm. You had to be a bit careful."

A shift in the life

Bourne walked us through a shift as a Bombe operator.

"You came on watch and you took over from whoever was there and you worked in pairs. On one day you would be operating the Bombe, which meant being on your feet for mostly all the time. And then the next day you could check it with the checking machine, which is a different machine you learnt to use.

"The only time you worked as a pair was plugging up because plugging up at the back of the machine was absolutely vital that you got it right and it was pretty complicated. There were all these wires; each plug had 13 pins, doubled up for 26 letters. They all had to go in on a straight line into these sockets. You mustn't twist them, break them or put them in wrong.

"And then there were three banks of alphabets to plug up. One of you shouted out the letters to join and the other one joined them up. So that was the back of the machine and then in the front of the machine we had the drums which were akin to the scrambling wheels on the Enigma – but we didn't know that [at the time].

"We were putting them on according to what was known as a menu, which were the settings which had been worked out at Hut 8 with cribs and so on. Well Hut 8 if you were doing naval codes.

"So you put the drums in according to the settings on your menu or sheet of information... and then you switched it on. Now it clicked around and clicked around and then while it was clicking around you were picking up the Bombe drums from the previous run and checking them for any short circuit possibilities.

"Every drum had rows of 26 brushes and each of those brushes had [around 16] strands of wire in each brush and they could touch each other – especially if you had turned your drums the wrong way when you put them on the machine. That was when you were in big trouble.

"During that time if your machine stopped you had to write the stop3 down and rush with it to the checker. And you also had to write down on a log sheet every run and what had happened – whether it was a good run, a bad run, a one stop or a two stops. You were on the go for seven-and-a-half hours out of eight hours."

Bumps in the night

El Reg asked Bourne if she met any of the famous code-breakers such as Welchman or Turing.

"The short answer to that was I was too young," she said. "By the time I joined up, Alan Turing was long gone. He went to America and then he came back here. I never met any famous code-breakers. All these initial code-breakers were much older than me."

What about her working and living conditions during the war?

"I was never in the huts but our own living conditions were horrible," she recalled. "We had cramped barracks. We had 72 of us sleeping in one room on double bunks. If the girl on the top bunk was a big girl then you were in for a very bumpy night, I can tell you.

"We had horrible food. We also had to do all of the things that ordinary Wrens did because we weren't supposed to be extraordinary. Even if we were up all night we still had to do all the washing up, we had to do our washing, we had to scrub our floors every month. It was not much fun, I can tell you." ®

1 No one is quite sure of the number of Bombes built – "around 211" is the best estimate, a representative of the National Museum of Computing told El Reg. "I don't think we will ever know for sure," he said, adding: "Only a small number of training Bombes were at Bletchley Park. Most were at outstations, mostly nearby, like Eastcote."

Wrens operated both the Bombes and Colossus. The only men around were likely codebreakers, engineers, etc due to wartime armed forces conscription.

2 Cribs are portions of cipher text of which the plain text equivalent is already known. Typically this would include phrases such as "Heil Hitler" and wetter (weather) that the Germans habitually sent in the first message of the day.

3 A stop (a term of art in WWII code-breaking) refers to when the Bombe drums have found a possible/candidate solution. Every stop is checked on the checker machine. There could be many false stops before the actual solution was found and the process ruled out false positives en route to cracking the key of the day.