What's better than one Linux distro? Dozens of 'em, of course!

The Windows Subsystem for Linux has begun to attract the attention of custom distributions with the arrival of Debian-based WLinux in the Microsoft Store.

Put together by open-source startup Whitewater Foundry, the WSL-optimised distribution is aimed at developers and pro users with a bunch of popular development tools such as git and neovim pre-installed and, more importantly, the fiddly work required to make Linux graphical apps work already done.

The distribution has been stripped of unnecessary packages to improve stability and security. After all, who needs systemd? Certainly not a user of the current incarnation of WSL. The authors have also taken care to customise the distribution to reflect the WSL environment, resulting in something that is lightweight – albeit at a cost.

Having spent time prodding at the Ubuntu WSL distribution in order to coax graphical Linux apps onto the desktop, we were keen to check out this optimised experience and found it an improvement, if still a little clunky in places. 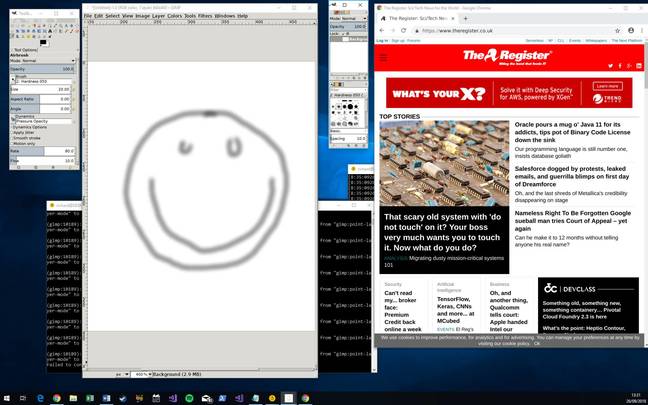 Graphical Linux applications on a Windows 10 desktop without the fuss

Using X410 as a Windows X client (PulseAudio can apparently be pressed into sound duties if required) and pointing DISPLAY at the correct IP and port, the process is about as painless as it gets. We took Gimp and Chrome for a spin and found things pretty stable, although a stream of warnings in the WSL console indicated that we had ventured a little beyond Microsoft’s vision for the system.

Linux veteran Hayden Barnes, of Whitewater Foundry, told The Reg that the project, based on Debian, arose from the distribution launcher open-sourced by Microsoft earlier this year. Development to package the customised distribution for WSL kicked off in August.

There are plenty of existing distributions already available for WSL, but Barnes felt most are “simply clones of a standard bare-metal server installation of those respective distros” and contain irrelevant packages while omitting common dev tools, such as git. He also reckoned that most needed more fiddling with than was necessary in order to use graphical applications.

WLinux is indeed a straightforward install, and the extensive Debian package list is just a sudo apt-get away. However, the work that goes into it does need to be paid for, and Barnes expects users to pay for downloading his work from the Microsoft Store, which will prove controversial in the Linux world.

The developer of the Elive distribution has remarked on the problem of getting paid for work, and Barnes hopes to “realise the potential to use the Store to build a sustainable open source project around this by charging a reasonable amount”.

Of course, the source is available for free for those unafraid of build tools.

As far as Microsoft is concerned, Barnes reports that it was “very receptive”. The store submission process has taken between two and three weeks and he reports “I have seen a lot of excitement from Microsoft employees, particularly working on Azure and DevOps”.

Microsoft will be delighted to see a roll-your-own distro appearing in the Microsoft Store, giving users yet another way of running Linux apps. What it lacks in the file-sharing functionality of the Hyper-V Ubuntu approach it makes up for in seamless windowing – if there is that Linux app you simply cannot do without. ®